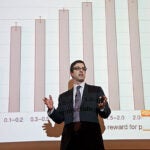 In 1943, Austrian-born essayist Jean Améry, working for the French resistance, was captured by the Gestapo. He wrote later of the experience in “At the Mind’s Limits,” remarking that torture was — simply — “the absolute absence of caring.”

Caring — for others, for ourselves, even for things and places — is at the core of our humanity. But how to cope with its demands in a medical setting was the subject of a two-panel conference this week (Dec. 6) in the Barker Center’s Thompson Room, sponsored by the Mahindra Humanities Center at Harvard.

The event capped three days of events entwining the humanities with the law (Dec. 3 and 4) and with medicine (Dec. 6).

Caring requires “a peculiar courage” and marks the very essence of “what really matters” to human beings, said Mahindra Humanities Center Director Homi Bhabha. (Bhabha is also the Anne F. Rothenberg Professor of Humanities in the Department of English.)

The conference investigated both the humanistic and technical dimensions of care giving. But “what really matters” — the humanistic, existential demands of care — got in the first word.

Actor Thomas Derrah — a founding member of the American Repertory Theater — opened the four-hour event with a reading from Tony Judt’s “Night.” The January essay illuminated his struggle with amyotrophic lateral sclerosis, a fatal motor neuron disorder also known as Lou Gehrig’s disease. (Judt died in August.) “And there I lie,” he wrote, itching, immobile, permanently cold, and “utterly and completely dependent upon the kindness of strangers.”

The kindness of strangers — and the flexibility of long-term medical care — will become more important than ever soon, as Americans age in greater numbers, said University Provost Steven E. Hyman, a psychiatrist and professor of neurobiology at Harvard Medical School. (By 2020, the number of those 85 or older will nearly double.)

Care giving is the repository of “much of our dignity and our decency,” he said — yet is often reduced to its economic terms alone. Too often, said Hyman, the debate also leaves aside the “enormous and incalculable cost” — emotional, physical, and financial — that caregivers themselves have to bear.

The numbers confirm the potential for strain and suffering. There are 66 million informal caregivers in the United States, said Rutgers University sociologist David Mechanic — “a highly disaggregated group” that operates largely outside of formal medical care. Many are unpaid family members; many others are untrained aides — often immigrants and other representatives of the work force’s lower rungs.

Meanwhile, he said, there is no coherent policy for long-term care in the United States — in part because lawmakers are “afraid of cost implications.”

But it is important to keep the dialog about care giving broad, said Arthur Kleinman, the Esther and Sidney Rabb Professor of Anthropology at Harvard and a professor of medical anthropology and psychiatry at Harvard Medical School. That means talking about care of the body, mind, children, and family — in both the long and the short term.

“Care giving is not new,” said Emily Abel, a professor of public health emerita at the University of California, Los Angeles. “It has long been a normative experience in women’s lives.” In 19th century America, she said, it dominated their lives from “girlhood to old age” — and was a two-edged sword. Care giving took them from home or kept them from home in a cycle of service and subjugation. But it was also a source of pride, skill making, and spiritual satisfaction.

Since then, said Abel, the image of care giving has fallen on hard times — an “undervalued and disrespected activity” that seems shabby and minor compared with the emerging science of medicine.

Yet care giving worldwide is still a “fundamental moral practice,” especially in its steady daily repetitiveness, said Julie Livingston, a Rutgers University historian who has worked in Botswana health care settings for the past 15 years. “This is where morality lies — in the constancy of care.”

But there are “moments of failure” too, she said, that arrive from the sheer volume of disease, and the “bottomless care” it requires. So knowing more about care giving becomes a way of “negotiating limits,” said Livingston — knowing when care has to stop and self-care has to begin.

“We can’t just talk about care giving when we talk about care,” said University of Minnesota political scientist Joan Tronto, who has written about the ethics of care. “Caring is also caring for the self.”

Yet humanistic models of care — assisted care communities, the “aging-in-place” movement, and others, said Mechanic — are still small compared with the needs of a rapidly aging population. Meanwhile, the medical system for care giving is fragmented, there’s no coherent financing policy, and there is a shortage of trained personnel.

Caregivers themselves remain “essentially invisible” in the discussion, said journalist Suzanne Gordon, an expert on nursing shortages. “The people we listen to the least, we value the least.”

Panelist Gary Gottlieb agreed that “medicine built on white patriarchy” has created inequalities that are “hard to erode.” (Gottlieb, a geriatric psychiatrist who teaches at Harvard Medical School, is CEO of Partners HealthCare in Boston.)

While society sorts out the issue, and finds a way to pay for care giving, said Gordon, the suffering continues, on a scale “times thousands” beyond what Judt recounted of his individual experience.

Care giving “cuts to the quick of who we are as human beings,” said Allan Brandt, who was charged with summing up. (He is the dean of the Graduate School of Arts and Sciences, and the Amalie Moses Kass Professor of the History of Medicine at Harvard Medical School.)

Solutions have to come from a wide range of disciplines and perspectives, he said — from both tender care and technical advances.

“If we’re going to deliver on that,” here and worldwide, said Brandt, we need “a much more enlightened polity than we currently have.”