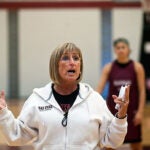 If you look carefully around campus, creatures are roaming

There are 492 trees in the two Harvard yards bounded by Quincy Street and Massachusetts Avenue, with 70 varieties in all, including 36 American elms, once the University’s signature species.

If you look up into those trees, you might see some of the 30 or so species of birds commonly seen at Harvard, including the house sparrow, mockingbird, and cardinal.

If you look past the ubiquitous gray squirrels, you might spy a rabbit, skunk, opossum, raccoon, or even a red fox like the one seen last month near Harvard Stadium. (It was sleeping in a roll of blue tarp.)

And if you look high enough, you can see the aerial raptors — hawks and falcons — that rest on the weathervanes, rooftops, trees, and balconies around campus. One nesting pair of red-tailed hawks takes up residence every year in a pine tree outside Pierce Hall on Oxford Street.

And sometimes you can watch the animal watchers, themselves a determined and thoughtful species on campus.

Remnants of the flora and fauna that existed in Cambridge when Harvard was founded in 1636 are still here. Ecologists say that virtually any animal will coexist with humans, if given sufficient cover, water, and a source of food.

Campuses are no exception. Harvard nature watcher Rob Gogan said most universities are “sitting on wildlife preserves.” When hawks wheel in the skies over Harvard looking for prey, he said, “it looks like Serengeti on the Charles River flood plain.”

Gogan is Harvard’s supervisor of Facilities Maintenance Operations Recycling and Solid Waste Removal. But every other month he publishes a journal of nature sightings in his departmental electronic newsletter. “Campus Nature Watch” has 40 faculty and staff contributors. One of them, Holly Hutchison, takes frequent lunchtime jaunts around Harvard Yard in search of wildlife. “Once you start, you start seeing more,” she said, and “the more you see, the more you look.”

Gogan’s nature-watch feature began in 2001, inspired by University of Wisconsin educator David. J. Eagan. He pioneered the idea that campus habitats were untapped, living classrooms, as well as places resonant with responsibility. “Every college and university,” Eagan wrote in 1992, “is the obligate steward of its place on Earth.”

Harvard is in line with that idea. Its sustainability principles, adopted in 2004, include one on protecting campus ecosystems.

Hutchison, the administrator for the Committee on Degrees in Folklore and Mythology, publishes a blog on the red-tailed hawks at Harvard, photos and video included. After all, she said, the “charismatic” wide-winged raptors inspired her interest in Harvard’s wild footprint. “Before that, I was only passively interested. The hawks tipped me over.”

“Nature Watch” contributor Sandy Selesky, a birdwatcher and wildlife photographer for 25 years, has had almost four decades to observe nature at Harvard. Her office looks out on the gardenlike courtyard of the Center for European Studies, where she is building manager. Hawks bathe in the pool there, cardinals nest in its bushes, and mammals scamper through.

“I would hope people would pay attention to what’s around them,” she said, sharing a lesson that every Harvard nature watcher embraces: Look and you will see.

“Most people don’t look, or they look down, or they look at people only,” said Sonia Ketchian, Ph.D. ’75, an associate at the Davis Center for Russian and Eurasian Studies who carries binoculars and packs bird food with her lunch. She saw a bald eagle high above Harvard Yard four years ago, recognizing it by its cry.

Nature watching teaches you to listen too, said Hutchison, and it reveals a hidden natural Harvard that most people don’t notice. “It has completely changed my perceptions of walking around here.”

It helps if your listening and watching is orderly. Last May, Harvard undergraduates did a two-day “bio blitz” to record all manner of wildlife on the Cambridge campus. They baited mammal traps with balls of oats, sugar, and peanut butter; roamed campus with a bat detector (no luck); seined the Charles for fish; and set out arthropod “pitfall” traps at Weld Boat House, Lowell Hall, and five other sites. That netted a treasury of bees, spiders, flies, weevils, leafhoppers, ants, stink bugs, and beetles. (Adam Clark ’11 posted photos of the specimens online, on a glistening arthropod Facebook not for the queasy.)

Students also peered into the trees to look at fledgling hawks, collected mushrooms, pondered Radcliffe Yard’s crab apple trees, noted a patch of lichen with fruiting bodies behind Tozzer Library, and watched a palm warbler gulp down a fat larva in a few bites.

In another official foray into nature, students in a Harvard course on the biology of fishes cast nets into the Charles. About a dozen species commonly inhabit the river, said Harvard ichthyologist Karsten E. Hartel, author of “Inland Fishes of Massachusetts” (2002). Included are bluegill, sunfish, perch, smelt, catfish, bass, killifish, alewife, pike, carp, and goldfish.

Hartel, a curatorial associate and collection manager at the Museum of Comparative Zoology, oversees 1.4 million specimens, some dating to the 18th century. But he is the first to admit that observing living fish in the Charles, at Harvard’s front door, is a subtle art. “You wouldn’t see anything spectacular,” he said of springtime fish runs, “but you would see a lot of splashing.”

Fish, bug, songbird, raptor, and fox — everything seems like a gift to Gogan, who sees the creatures around Harvard as the canaries in our urban coal mine. “If they can thrive here,” he said, “we can probably thrive here.”