Where surgery is lacking 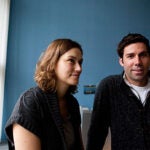 ‘Another set of fingers’

On a screen in the cavernous hall at the Harvard Club of Boston were images of two patients, one with a hernia and the second with breast cancer, conditions routinely treated with surgery in the United States.

Only these patients were not in this country. They were in the developing world, where access to surgery is a rarity. Instead of neat scars from conditions treated early, the images showed a hernia so distended that it was as large as a football, and a cancer left untreated until it consumed a breast.

For decades, the focus of medical professionals fighting to improve health in the developing world has been on defeating infectious disease. In more recent times, the focus has shifted toward chronic illnesses, such as heart disease and diabetes, which until recently were thought of as problems limited to industrialized nations.

Though people in the developing world have regular surgical needs — not just from hernias and cancer but also from car accidents, cooking fires, industrial accidents, even childbirth — surgical care is often not considered part of the global health picture.

“Surgery is the neglected stepchild of global health,” said Paul Farmer, Maude and Lillian Presley Professor of Global Health and Social Medicine at Harvard Medical School (HMS) and co-founder of Partners In Health, a nonprofit that specializes in providing care to the world’s poor in countries such as Haiti, Rwanda, and Lesotho.

Farmer was just one speaker at the all-day session, “The Role of Surgery in Global Health.” The event was introduced by Kelly McQueen, a research fellow at the Harvard Humanitarian Initiative (HHI), and by HHI director Michael VanRooyen, associate professor of global health and population at the Harvard School of Public Health (HSPH). McQueen said the problem of treating surgical disease internationally is largely unknown and hard to estimate. Often, she said, the underlying unmet needs don’t become apparent until a disaster, such as Haiti’s earthquake last January, brings in surgeons to treat the trauma.

VanRooyen asked surgeons in the room to help make the case that surgery needs to be considered part of the right to basic health care.

“Our task together is to make this argument,” VanRooyen said.

Gawande told the story of a man he met while working at a hospital in India. The man, who had trouble breathing, had been to a number of hospitals and clinics. X-rays showed fluid in his lung, but he had received little treatment.  When Gawande found the man, he could barely breathe, and Gawande and the local doctor with whom he was working understood that they needed to drain fluid from his chest. The hospital, however, didn’t have a chest tube, so they wrote a prescription for one. The man’s brother raced to nearby medical suppliers to get it. When he returned, they had to wait again, this time for an operating room. When they got to the operating room, there were no knives. So the man waited again while the brother was sent to buy a knife.

By the time the brother returned for the second time, the man was dead, of a tubercular abscess in his lung.

“It’s about people and skill. It’s about systems and capacity,” Gawande said.

While a lack of resources is a constant problem, Gawande said there are ways to reduce the cost of vital resources. He described a new collaborative effort aimed at getting critical blood oxygen monitoring equipment, called pulse oximeters, to resource-poor hospitals. Because of a lack of demand in the developing world, hospitals had been paying $2,000 to $3,000 for each unit, while American hospitals pay just $900 to $1,000, in part because of their economy of scale. By banding together and approaching manufacturers directly, the poor hospitals got a price of $189 for manufacturing and a delivered cost of $240 per unit.

Gawande said global health is in the charter school phase of learning how to adequately deliver surgical services in resource-poor settings. Like charter schools, many groups are struggling, though a few, such as Partners In Health, offer shining examples of ways to succeed.

“We are in the charter school phase in our efforts to do global surgery in a good way,” Gawande said. “We’re looking for the city on the hill.”