‘Treat and Greet’ in Allston 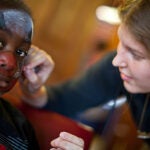 The sun had yet to set over Allston last Friday (Oct. 29) when the ghosts, goblins, and princesses took to the streets.

Hosted by Harvard University, the Halloween “Treat and Greet” celebration and open house in the Barry’s Corner section of Allston drew flocks of festively dressed local residents and children.

Outside at the last Harvard Allston Farmers’ Market of the season, a band played while kids decorated pumpkins, and shoppers stocked up on the last of summer’s bounty. Stone Hearth Pizza, a new family restaurant slated to occupy the former Citgo station across the street, passed out free calzones.

“Treat and Greeters” were given a map to follow, featuring hotspots where they could enjoy activities — from spooky storytelling to touching animal bones — at Harvard-related offices at 175 North Harvard St. and 219 Western Ave. The event was one of Harvard’s many community-oriented events, but special in that it involved nearly all of the nearby Harvard departments and programs and other affiliates — such as the arts and education nonprofit Silk Road Project — in the Barry’s Corner area and was aimed at introducing residents to Harvard’s initiatives and outreach programs.

“In many ways, the new tenants in our Allston spaces are like any house or business: From the outside you may see a quiet building, but inside there’s a lot going on,” said Christine Heenan, vice president of Harvard Public Affairs and Communications, who came to the event with her two sons. “We wanted to build on the magic of the season and also give people the opportunity to learn more about initiatives that serve this neighborhood and beyond.”

Inside the Harvard Allston Education Portal, perfectly witchy Peggy Mativo ’13, dressed in a pointed hat, was collaborating with John-Paul Franks, costumed as a Native American, to come up with a ghostly story to tell. John-Paul and his older sister are mentored weekly at the Ed Portal.

“My name’s Peggy, and I’m a good witch, so you don’t have to be afraid,” said Mativo, one of the Ed Portal’s undergraduate mentors.

“Just don’t make it too scary,” John-Paul said of their story. “How about some creepy magic that would make it seem scary?” And with that, the two dreamed up the character of Mr. Pumpkin.

At a nearby table, Joanna Larson ’11 was manning a display of animal artifacts on loan from the Harvard Museum of Natural History.

“Is this the head or the tail?” Larson asked a boy about a long snakeskin.

“I would say that this is the head,” he replied, but diverted suddenly to a small skull sitting on the table. “What’s that?”

And at another stand, Brandon Silverman ’12, dressed in a Broad Institute jacket — as a mad scientist — was showing a group of kids some chemistry tricks. Dry ice emitted smoke from a beaker, and there was a “mystery box” where kids could reach in and pull out creepy objects. Daring kids even played with “gloop,” a mixture of Borax and water that transformed, with some kneading, into a solid.

Along the trail, inside the Silk Road Project’s offices, executive director Laura Freid sat on the floor with children as they explored drums and gongs from around the world. The project relocated to Harvard and Allston earlier this year.

Further down the hall, tables at the Harvard Achievement Support Initiative (HASI) were filled with children playing learning games from HASI SmartTALK, a collection of 24 after-school programs in Boston.

HASI’s co-assistant directors Joan M. Matsalia and Lisa Moellman were on hand. “Some of the kids that came in with their parents were very familiar with these games,” said Matsalia. “It really reinforced with parents the kind of excitement and learning that can happen when they play these games together,” added Moellman. Other treat and greet stops included Harvard Real Estate Services, Harvard Recycling and Surplus Center, which gave away treasures in need of a home, and University Operations Services’ Mail Services and Fleet Management.

Over at the Ceramics Program, Allston resident Chua An Tran walked with her children, Joanne, 9, and Charlie, 3, on a tour of the studio “Haunted House” led by ceramics artist Alice Abrams.

Wayne Fuerst, an instructor in the program, made a ceramic jack-o-lantern for the kids and explained the process of firing, in which the clay is cooked and hardened.

Outside, as the light began to wane, some witches and warlocks stayed for a costume parade and dancing, while others were on the move. Resident Robin Hoffman was ushering her children home.

When asked what activity they liked best, her son recalled a scene from the Ceramics Program tour: “I like how the skeleton was coming out of the oven!”