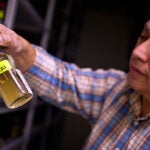 Three scholars from Harvard’s Music Department received prizes at the Society for Ethnomusicology conference in Los Angeles in early November.

G. Gordon Watts Professor of Music and Professor of African and African American Studies Kay Kaufman Shelemay was awarded the 2010 Jaap Kunst Prize for the most significant article published in the field of ethnomusicology for her piece “The Power of Silent Voices: Women in the Syrian Jewish Musical Tradition.”

Graduate student Katherine Lee, a teaching fellow in music at the Graduate School of Arts and Sciences, won both the 2010 Charles Seeger Prize for Best Student Paper of the year and the 2010 Martin Hatch Award of the Society for Asian Music for “P’ungmul, Politics, and Protest: Drumming During South Korea’s Democratization Movement.”

Kiri Miller, Ph.D. ’05, this year’s Bunting Fellow at the Radcliffe Institute for Advanced Study, was awarded for her recent Journal of the Society for American Music article “Schizophonic Performance: Guitar Hero, Rock Band, and Virtual Virtuosity.” She nabbed the Richard Waterman Junior Scholar Prize for the most significant article in ethnomusicology written by a member of the Society for Ethnomusicology and an honorable mention for the Jaap Kunst Prize.