They ride by dawn 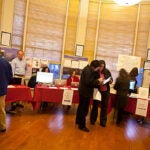 Most fall mornings, a slightly sleepy collection of men and women rises early to hit the road.

They are an eclectic group of Harvard students, staff, faculty, and community members. They range in age from their late teens to 50-something. They can be freshmen or CEOs, but they move fast, and under their own power. They ride by bike.

Eun Young Choi is their Pooh-Bah. Choi, a Harvard Ph.D. candidate in neuroscience, was inspired by a leisurely summer cycle around Martha’s Vineyard. When she heard about the Harvard University Cycling Association (HUCA) in 2007, she decided to investigate.

Now she is its administrative and spiritual leader and has gone from novice rider to top competitor.

“I started out with no athletic background, and now cycling has become a huge part of my life and has changed my attitude and perspective on academia and life challenges in every way,” said Choi, who carries the title of Pooh-Bah in a nod to the exalted office from the comic opera “The Mikado.”

The organization, which dates way back to 1890, fosters a love for cycling and shares it with anyone willing to listen and learn. The student-run group relies on fundraising and donations from private sponsors for support, and on a dedicated cadre of volunteer coaches.

The “open to all” aspect of the team was “been important right from the start,” said John Allis, a champion of U.S. cycling in the 1970s and a three-time Olympian who recently retired after almost 30 years as a HUCA coach.

“You don’t necessarily have to race. … A lot of the skills you will learn while riding with the team are very applicable for riding in traffic, bike handling, physical fitness, and being a better bike rider,” said Allis.

Still, Allis said that developing riders who can go on to compete is the club’s main goal.

“We are, of course, ultimately racing oriented, so a certain amount of competitive spirit is a help on the rides. You are not out there to look at the birds and the bees.”

In 1985, Ed Sassler, then a Northeastern University student, heard that Allis was working with Harvard riders. With no cycling team at Northeastern, Sassler joined HUCA. He never left. He rode as a student and then as a coach, describing his early advisory role as that of a sheepdog chasing down overzealous riders who got too far ahead, or helping corral those dropping behind the pack.

Today, Sassler, who works full time in a bike shop, continues to coach, running training rides in the fall, working on the group’s fitness level in the gym in winter, and preparing HUCA members for the racing season.

“The problem with cycling is everybody thinks it’s as easy as riding a bike. In reality, it’s not that simple,” he said.

Sassler called the experience frustrating at times, since some students have to drop out because of school demands. But there are many who stay and excel in competitions.

“I had a rider who started out as the slowest thing on two wheels, and she ended up taking the silver medal at nationals,” said Sassler.

Harvard students in degree-granting programs race in collegiate competitions in the spring, and other riders compete in races from May through October. In addition, the club organizes an annual 75-mile fun ride that winds from Harvard University to Harvard, Mass.

Ian Boothby, a tall, lanky freshman from Nashville, joined HUCA after reading about it online. He credits the club with improving his endurance and his comfort level with biking in a pack, and he is looking forward to trying his hand at racing in the spring.

“It’s just an open community, open to anyone who wants to participate and learn about cycling and bike racing. We welcome people of all skill levels,” said Choi.

Mark Bowen, who works at a local medical device company and has helped coach HUCA for the past decade, was stunned when he first saw HUCA members helping each other up a hill. With some other clubs, he said, that “never occurs to them.” But HUCA is different.

“You put your hand on their back and help them up the hill so they are able to stay with us and learn and develop,” said Bowen, adding, “It reflects the whole attitude of this group.”

To recruit students for the racing season, the group holds six weeks of basic skills training in the fall.  While geared toward potential racers, the rides are open to anyone and cover proper positioning, safety tips, bike maintenance, and racing skills, such as sprinting, cornering, and contact between bikes.

After taking a break from cycling for years, Harvard Law Professor Mark Ramseyer joined up and was out with the club regularly last year, from February through August. Calling himself “too old for racing,” Ramseyer, Mitsubishi Professor of Japanese Legal Studies, said he just enjoys the chance to get out and ride with others.

“It’s fun. You ride with a group, and you are thinking about other things besides how bad your legs hurt.”

Recently the group gathered before sunrise in front of Peet’s Coffee, the regular meeting spot in Harvard Square. Despite the unsettled weather, members remained undaunted, both by the prospect of rain and a couple of serious hills in their immediate future.

After a brief ride, they stopped to discuss what would come next. Noting that some members had managed to sprint up a smaller hill on an earlier outing, Sassler told them he had found a much longer one they would have to simply “settle in and climb.”

Reaching into her bag and offering the riders a mini-chocolate and peanut butter cup before the ascent, Choi inspired the group with a promise of more candy at the top and words fit for a club that loves competing, learning, and having fun. “Everyone’s a winner,” she said.