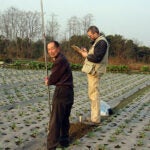 The search for China’s roots

Several years ago analysts predicted a bleak outlook for the world’s water supply.

“People were saying, ‘If we don’t do anything now, in 100 years the world will not exist,’” said Nestlé Chairman Peter Brabeck-Letmathe of his initial exposure to rising fears about global water consumption and impending shortages.

His own sobering research convinced the international executive that an even grimmer forecast was ahead. “The more I looked into the water issue, I came to the conclusion that you don’t have to wait 100 years.”

Since then, Brabeck-Letmathe has become something of a water champion. Two years ago, he helped to form the 2030 Water Resources Group, a collection of organizations dedicated to developing technology and guiding policy aimed at solving the looming water crisis.

Brabeck-Letmathe’s interest in the topic was initially part of a business decision, he admitted during a Harvard Kennedy School (HKS) lecture last Thursday (Oct. 28), titled “Global Water & Food Security: A New Role for the Private Sector.” Realizing that having water was the single most important factor for Nestlé’s long-term success, he decided to investigate the issue further.

“What I found was, frankly, speaking for me, astonishing,” he told a crowd at the HKS Starr Auditorium.

Brabeck-Letmathe warned that the water crisis is intricately linked to the availability of food. When water is in shorter supply, fewer crops are produced and food prices jump, he said. A threefold increase in the price of food for those who spend between 50 and 80 percent of their disposable income on it, he cautioned, would mean “a real disaster.”

The numbers are alarming. Brabeck-Letmathe cited the 2009 report “Charting Our Water Future,” released by the Water Resources Group, and said that if conditions don’t change for the better, there will be a 40 percent gap between water supply and demand by 2030. He said agriculture accounts for 93 percent of the world’s water consumption, and it requires 9,200 liters of water to produce one liter of biodiesel, the fuel widely used in Europe.

Answers to the problem could include setting a price on water, under certain conditions, so  “it is being used in a more responsible manner,” along with better irrigation methods, smarter government policies, and creation of water exchanges to regulate its sale and transfer.

The private sector has a part to play in developing technologies, lending its voice to the public policy dialogue and creating an awareness of the “severity of the problem,” said Brabeck-Letmathe.

But such a complex issue needs the assistance of leading academic institutions such as Harvard, he said, and he called the Harvard University Water Security Initiative an important step in the right direction.

Harvard, said Brabeck-Letmathe, could help to establish “a catalog of best practices, of best advisers, and suppliers” to help address the situation.

Harvard’s new water initiative, directed by John Briscoe, Gordon McKay Professor of the Practice of Environmental Engineering, is a collaborative research program that draws on a range of disciplines relevant to water management.

Briscoe, who took part in the discussion, praised Nestlé for its “extraordinary leadership role.” He said he looked forward to bringing together the skills at Harvard with partner institutions like the Massachusetts Institute of Technology and the University of Nebraska “to become part of a better water world.”