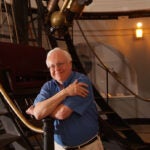 Four from Harvard are among winners bound for Oxford

Three Harvard undergraduates and a first-year Harvard Medical School student are among the 32 American men and women named Rhodes Scholars on Saturday (Nov. 20). They will begin study next October at the University of Oxford in England.

They were chosen from among 837 students nominated by 309 colleges and universities nationwide.

To see a complete list of the scholars, visit http://www.rhodesscholar.org/press.