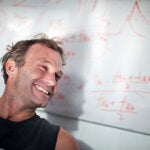 As debilitating as disease can be, sometimes it acts as a teacher.

Researchers at Harvard Medical School and the Harvard School of Dental Medicine have found that by mimicking a rare genetic disorder in a dish they can rewind the internal clock of a mature cell and drive it back into an adult stem-cell stage. This new “stem cell” can then branch out into a variety of differentiated cell types, both in culture and in animal models.

“This certainly has implications for personalized medicine, especially in the area of tissue engineering,” says Bjorn Olsen, the Hersey Professor of Cell Biology at Harvard Medical School and dean of research at the Harvard School of Dental Medicine.

These findings appear online in Nature Medicine on Nov. 21.

Fibrodysplasia Ossificans Progressiva (FOP), which affects fewer than 1,000 people worldwide, is a horrific genetic disease in which acute inflammation causes soft tissue to morph into cartilage and bone. Over the course of a few decades, patients gradually become ossified, as though parts of their body have turned to stone. There is no cure or treatment.

Damian Medici, an instructor of medicine at Harvard Medical School and Beth Israel Deaconess Medical Center, found that, unlike normal skeletal tissue, the pathological cartilage and bone cells from these patients contained biomarkers specific for endothelial cells (cells that line the interior of blood vessels). This finding led him to question whether the cartilage and bone growing in soft tissues of FOP patients had an endothelial origin.

Medici and his colleagues transferred the mutated gene that causes FOP into normal endothelial cells. Unexpectedly, the endothelial cells converted into a cell type nearly identical to what are called mesenchymal stem cells, or adult stem cells that can differentiate into bone, cartilage, muscle, fat, and even nerve cells. (Embryonic stem cells have the potential to become any type of cell, whereas adult stem cells are limited.)

What’s more, through further experiments the researchers found that instead of using the mutated gene to induce the transformation, they could incubate endothelial cells with either one of two specific proteins (growth factors

TGF-beta2 and BMP4) whose cellular interactions mimicked the effects of the mutated gene, providing a more efficient way to reprogram the cells.

Afterward, Medici was able to take these reprogrammed cells and, in both culture dishes and animal models, coax them into developing into a group of related tissue types.

“The power of this system is that we are simply repeating and honing a process that occurs in nature,” says Olsen. “In that sense, it’s less artificial than other current methods for reprogramming cells.”

According to study collaborator Frederick Kaplan, Isaac & Rose Nassau Professor of Orthopaedic Molecular Medicine at the University of Pennsylvania School of Medicine and an expert on FOP, “While we want to use this knowledge to stop the renegade bone formation of FOP, these new findings provide the first glimpse of how to recruit and harness the process to build extra bone for those who desperately need it.”

Medici and Olsen echo this sentiment, stating that the most direct application for these findings is the field of tissue engineering and personalized medicine. It is conceivable that transplant patients may one day have some of their own endothelial cells extracted, reprogrammed, and then grown into the desired tissue type for implantation. Host rejection would not be an issue.

The research was funded by the National Institutes of Health.