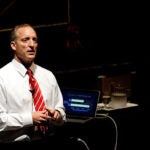 The Radcliffe Institute for Advanced Study has named Alison Franklin director of communications. A 1990 graduate of Harvard College, she brings to the institute 20 years of experience as a communications professional in government, politics, and the nonprofit sector.

From 1996 to 2002, Franklin was communications director and press secretary for Massachusetts State Senate President Thomas F. Birmingham ’72, J.D. ’78, and was named top press secretary by Beacon Hill, the Boston Phoenix, and the State House Press Association. She has also worked on statewide campaigns in California and Massachusetts.

Prior to joining the Radcliffe Institute staff, she was City Year’s director of communications, leading media and messaging for the Boston-based headquarters and the organization’s 20 locations in the United States.

Whether she was working for elected officials, campaigning for candidates, or growing a nonprofit, Franklin’s work involved developing and implementing communications strategies, assessing and revitalizing brands, creating effective messages, and working with media. She is eager to put that expertise to work at the Radcliffe Institute.

“The ideas, people, and events that propel the Radcliffe Institute are characterized by excellence and energy, and I’m honored to be part of the institute and help share its work in new and powerful ways,” said Franklin. “We will be communicating the mission and messages to convey the intellect and innovation that are hallmarks of the institute.”