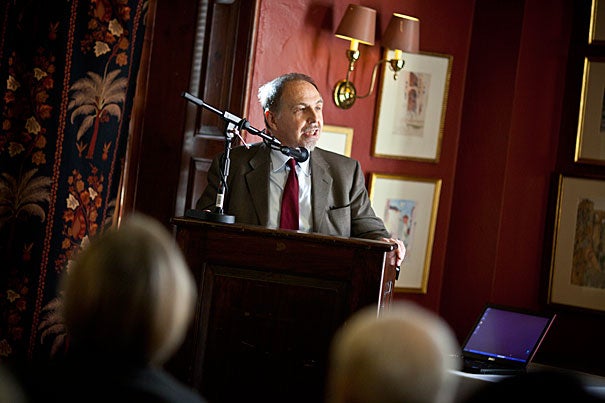 When the title track from Aretha Franklin’s 1967 album “I Never Loved a Man the Way I Love You” was released, fans in Boston lined up around the block to buy a copy of the single. Listening to Franklin’s blend of gospel fervor — her father was, after all, a Baptist preacher — and soulful sexiness, listeners felt, in the words of one contemporary critic, “as if the millennium had arrived.”

It was Franklin’s first album with Atlantic Records after leaving Columbia, where she had recorded since 1960, and many fans consider it her artistic as well as popular breakthrough. The lyrics to “Never Loved a Man,” however, were anything but groundbreaking in addressing female sexual submission: “You’re a liar and you’re a cheat,” Franklin sings of a no-good boyfriend, “and I don’t know why I let you do these things to me.”

Franklin’s words told the woes of a seemingly powerless woman. But as Radcliffe Fellow Daphne Brooks argued in a recent lecture, “Bold Soul Ingénue: Aretha Franklin’s Sonic Black Feminism,” her physical presence and vocal stylings revealed a confident and innovative performer reclaiming her physical self through her music.

“Lyrically, Aretha’s feminism is a mixed bag,” Brooks told a packed house at the Radcliffe Gymnasium on Wednesday (Nov. 10). “But the way that she vocalizes her complaints and trials exceeds the limits of her abjection in these songs.”

Brooks, a professor of English and African-American studies at Princeton University on a yearlong fellowship at Radcliffe, has written extensively about the ways performance can help reveal and transcend alienation and oppression. Her book “Bodies in Dissent: Spectacular Performances of Race and Freedom, 1850–1910” explored how 19th-century black activists and entertainers used performance to overcome the trials of slavery and, after Emancipation, racial discrimination.

On Wednesday, Brooks argued that Franklin — known as the “Queen of Soul” —was a torchbearer for 20th-century women facing the same kind of social and political constraints.

“The social mythology attached to the slave woman … casts a long shadow over African-American women in the public sphere long through the 20th and 21st centuries,” Brooks said. The problem was especially acute in the mid-1960s, when popular culture “pathologized the black matriarch.”

Alongside Nina Simone, Mamie Smith, and others, Franklin was perhaps the most high-profile example of a black female performer who was comfortable — and forceful — in her own skin, said Brooks. “Aretha-era soul was about discovering what you already were and finding that beautiful.”

Franklin was embraced by everyone from “civil rights integrationists to black power insurgents” to feminists and mainstream listeners of all races, Brooks said. But despite her ability to “connect with mass audiences in complex ways,” she argued, Franklin’s role as a black female producer of culture is rarely fully explored.

A chapter on Franklin will likely appear in Brooks’ forthcoming book, “Subterranean Blues: Black Women and Sound Subcultures — from Minstrelsy through the New Millennium,” which explores the “secret histories” of black women in popular music from the aftermath of the Civil War through the present.

“My concerns as a black feminist are what it means for a people of forced migration, whose bodies have been used historically against their will, to take back their bodies sonically,” Brooks said. “I want to explore how these women use their physicality and performance to rewrite their selfhood.”

Franklin was no exception to that phenomenon. Playing Franklin’s live 1972 recording of “Amazing Grace,” Brooks pointed out the singer’s unmistakable melisma — the style of singing a single syllable over a range of notes, now better known as the signature vocal trick of pop divas Whitney Houston and Mariah Carey.

As the sound of Franklin’s voice, recorded at the New Temple Missionary Baptist Church in Los Angeles in January 1972, filled the Radcliffe Gym, Brooks marveled at Franklin’s ability to capture the “existential challenges” that have plagued black life since slavery.

“She turns the vocal run itself into a thousand miles of freedom,” Brooks said.