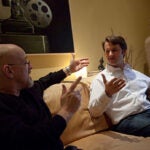 Wandering mind not a happy mind

A noninvasive electric stimulation technique administered to both sides of the brain can help stroke patients who have lost motor skills in their hands and arms, according to a new study led by researchers at Beth Israel Deaconess Medical Center (BIDMC).

Described in the Nov. 10 online issue of the journal Neurology, the findings showed that stroke patients who received bihemispheric transcranial direct current stimulation (tDCS), coupled with a regimen of physical and occupational therapy, had a threefold greater improvement in motor function compared with patients who received only physical/occupational rehabilitation and a placebo form of stimulation.

“We think that the key to this therapy’s success in improving stroke patients’ motor function is based on its ability to affect the brain activity on both the stroke-affected side of the brain and the healthy side of the brain as patients work to relearn lost motor skills,” says senior author Gottfried Schlaug, the director of the Stroke Service in BIDMC’s Department of Neurology and associate professor of neurology at Harvard Medical School (HMS).

In the brain of a healthy individual, the left and right sides of the motor cortex work in tandem, inhibiting one another as needed in order to successfully carry out such one-sided movements as writing or teeth-brushing. But, explains lead author Robert Lindenberg, an HMS instructor of neurology at BIDMC, when a person suffers a stroke (as might happen when an artery to the brain is blocked by a blood clot or atherosclerotic deposit) the interaction between the two sides of the brain involved in motor skills changes.

“As a result,” he explains, “the motor region on the unaffected side of the brain begins to exert an unbalanced effect onto the motor region of the brain’s damaged side.” And, as Schlaug and Lindenberg further explain, this leads to an increased inhibition of the stroke-damaged motor region, as the remaining intact portions of this region try to increase activity in the motor pathways to facilitate recovery.

tDCS is an experimental therapy in which a small electrical current is passed to the brain through the scalp and skull. Because previous studies had determined that tDCS could improve motor function if applied to either the damaged or undamaged side of the brain, Schlaug’s team hypothesized that applying tDCS to both sides — while simultaneously engaging the stroke patient in motor skill relearning activities — would further speed the recovery process.

Schlaug and his collaborators studied 20 patients who had suffered an ischemic stroke at least five months prior to the onset of the study. Participants were separated into two groups: Half of the subjects received a 30-minute daily treatment session of electrical stimulation, while the other half received a “sham” placebo treatment designed to mimic electrical stimulation. Both groups of patients concurrently received 60 minutes of occupational and physical therapy. The treatment was repeated daily for five days.

By using sophisticated MRI (magnetic resonance imaging) techniques, the researchers were able to “map” the positions of the stroke lesions in relation to the brain’s motor system. “This helped us to very closely match the two patient groups,” notes Schlaug. “Not only did the two groups of patients outwardly exhibit similar motor impairments, but we could tell from the MRIs that their lesions were positioned in similar areas of the brain. This novel approach strengthens the results, since no other between-group factor could explain the therapy’s effects.”

The results showed that the patients treated with tDCS exhibited a threefold improvement in motor outcomes, such as an improved ability to grasp or perform wrist and finger movements, compared with patients who underwent physical and occupational therapy coupled with placebo stimulation. In addition, functional brain imaging showed that the therapy’s effect was correlated with increased activity of the brain’s nondamaged motor parts on the side of the stroke hemisphere.

“This is the first time that stimulation therapy has been administered simultaneously to both brain hemispheres and coupled with physical/occupational therapy,” explains Schlaug. “Both sides of the brain play a role in recovery of function [following a stroke], and the combination of peripheral sensorimotor activities and central brain stimulation increases the brain’s ability to strengthen existing connections and form new connections. It is a testament of just how plastic the brain can be if novel and innovative therapies are applied using our current knowledge of brain function.”

This study was supported, in part, by grants from the National Institutes of Health.