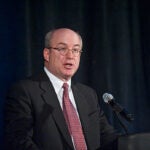 What it means to have a rising population of healthy elderly

In the basement of Harvard Law School’s Hemenway Gymnasium, a battle of the ages is being waged.

Twice a week, the thwack of a squash ball against the court’s walls signals a match between Goelet Professor of French History Patrice Higonnet, 72, and opponents such as History Professor Dan Smail, 30 years his junior. Higonnet, tall and trim in his white uniform, holds his own, though he confesses that Smail gets the better of him more often than not. Still, at an age when people in past generations would have been content to just watch such a contest, Higonnet is competitive and, sometimes, victorious.

Improvements in medical science and in understanding healthy lifestyles have led to longer lives for many people like Higonnet, who continue to enjoy not only more days, but healthier and more active ones.

While there have always been people with remarkable longevity and health, today the ranks of the healthy old, as well as the very old, are expanding at the fastest rate in history. The U.S. government expects a relative explosion of people reaching the milestone age of 100 in the coming decades. Last year, there were 70,490 centenarians in this country. By midcentury, that number is expected to top 600,000.

Such a large demographic trend is bound to have sweeping societal effects, and Harvard researchers are in the forefront of such studies, in medicine, public health, business, education, and the law.

Across the University, faculty members are examining issues raised by aging, from the underlying medical and biological mechanisms of it, to the stress that older populations put on retirement systems, to the opportunities offered by what amounts to a gift of time for those described by sociologist Sara Lawrence-Lightfoot as “neither young nor old” — those living in the first new life phase to emerge since adolescence a century ago.

Researchers at Harvard and affiliated hospitals have made key contributions in recent decades to living longer, such as Joseph Murray’s pioneering work on organ transplants, John Enders’ tissue culture breakthrough in the battle against polio, the Harvard Center for Health Communication’s designated-driver campaign, and the ongoing efforts of faculty members such as Walter Willett, the Fredrick Stare Professor of Epidemiology and Nutrition, to combat obesity and type 2 diabetes through healthier eating.

Investigating the aging process
Harvard researchers today work not just on individual diseases and habits. Roughly 100 researchers in a dozen labs are examining the roots of aging itself. Harvard Medical School (HMS) Pathology Professor David Sinclair heads one prominent effort, at the HMS Paul F. Glenn Laboratories for the Biological Mechanisms of Aging.

Sinclair, a pioneer in research into sirtuins, compounds that play key roles in guarding against the debilitation of aging, said the field has moved forward by leaps and bounds since the 1990s, with the discovery of the seven SIRT genes that code for sirtuins.

Sinclair said the Glenn Labs focus on aging-related physiological changes that lead to disease rather than specific diseases themselves. Researchers there hope that by addressing underlying causes, they can find keys to preventing a suite of age-related ailments, rather than making progress on just a single condition.

“The research at the Glenn Labs is to understand the fundamental biology of aging rather than focus on one particular disease of aging. By doing so we hope to have a broader impact on the many diseases of aging,” Sinclair said.

For instance, it has long been shown that calorie-restricted diets can help a person age healthfully. The SIRT genes underlie the protective benefits of such a diet. Drugs to manipulate the pathways through which those genes operate are in development and could be on the market within five years, Sinclair said.

Sinclair doubted that significant new extensions of life span are possible in the near future, but nonetheless said that continued improvements in health are likely, to the extent that commonly living healthy until age 90 or 100 is not that far away. David Canning, professor of economics and international health at the Harvard School of Public Health, said that having many more people live longer presents its own challenges — including overburdened retirement and medical systems — though those are good problems to have.

Shifting an aging population
The Program on the Global Demography of Aging, run out of the HSPH’s Center for Population and Development Studies, is examining four main themes related to aging globally.

One examines changing patterns of disease and death. A second seeks to understand the social determinants of population health and aging. A third examines Medicare and basic health care financing, while the last seeks to understand the demographics and economic consequences of aging, including the effects on retirement and social security systems. The program draws on faculty from beyond HSPH, including the Harvard Kennedy School, the Medical School, and the Faculty of Arts and Sciences.

Canning, who serves as the program’s deputy director, said aging populations can affect developed and developing nations differently. In developed ones, populations aged as the nations got wealthier, giving governments and individuals the means to deal with higher costs for retirement and greater numbers of old, sick people. The populations of developing countries, however, are aging faster than they’re accumulating wealth, which probably will lead to larger, older populations reliant on weak retirement and social security systems, to unknown effects.

Though the issue of aging population is often framed as a negative because it presents challenges to retirement, health care, and labor, Canning said it is important not to lose sight of the fact that those challenges are actually reflections of outdated institutions.

“These institutions were set up for people with shorter life spans. We have to change the institutions,” Canning said. “The fundamental thing is that having a long, healthy life is a good thing.”

The cost of living longer
At Harvard Law School, the Pension and Capital Stewardship Project, part of the Labor and Worklife Program, is examining how to pay for longer lives. The project examines how pension systems and retirement plans invest the trillions of dollars they manage, and works to improve handling those funds through working papers and conferences. Project director Larry Beeferman said the project’s researchers examine alternatives in the United States and abroad, seeking ideas about how best to handle retirement funds.

Retirement may still be a career away for Harvard Business School students, but faculty members think it’s not too early for them to think about the problems facing people investing for the future. John Gourville, the Albert J. Weatherhead Jr. Professor of Business Administration and co-author of a case study dealing with a retirement financing option called immediate annuities, said the case offers not just a primer on retirement financing, but also on how to market something that people may not want but that still might be good for them.

The annuities, Gourville said, have become attractive options because not only are people living longer, but the method of supporting retirees is changing. A prior generation of workers received pensions that lasted as long as they lived. Those workers could count on getting a specific dollar amount every month, augmented by a second check from Social Security.

But companies are moving away from pension plans to retirement plans that provide not a monthly benefit, but instead an overall amount, often handed over at retirement and managed by the retirees themselves. The result, Gourville said, is that it’s up to retirees to make sure their funds last for the rest of their days, a tricky task since nobody knows how long they’ll live or how market instruments will fare.

Immediate annuities, Gourville said, are one way to manage that uncertainty. A retiree can buy an immediate annuity with a large lump sum. The annuity then pays them a small monthly amount until they die, say $500 or $600 monthly for a $100,000 annuity. If a retiree buys the annuity at age 65 and lives until 95, he or she will wind up getting about 7 percent return on their money, Gourville said.

“While it’s tempting to view an immediate annuity from an investment perspective and question their worth, it is more appropriate to view them from an insurance perspective. Quite simply, they insure against outliving one’s wealth,” Gourville said.

Though money is important to a comfortable retirement, living longer also means having more time. Lawrence-Lightfoot, the Emily Hargroves Fisher Professor of Education at the Harvard Graduate School of Education (HGSE), spent two years traveling the country to find out just what people are doing with that time.

A bounty of time
Lawrence-Lightfoot interviewed 40 people between ages 50 and 75, those whom she refers to as being in life’s “third chapter.” That chapter, which she explores in her 2009 book by the same name, is a complex time when people are finding themselves free of the full-time obligations of raising families, but are still bound by those ties. Many are financially stable, experienced in both life’s joys and travails, and, in some cases, facing new opportunities.

The book highlights people who’ve embarked on fresh challenges, who’ve paid attention to life’s unfinished business, and who’ve shifted from material gain to helping others. They’ve done it in a culture that generally worships youth and that, in some cases, can be resistant to the idea of vibrant, experienced older people embarking on new voyages instead of sitting quietly on the shoreline.

“The culture surrounding us doesn’t appreciate aging or the elderly,” Lawrence-Lightfoot said. “This is not the last chapter. It’s the penultimate chapter…. Now, we’re neither young nor old, and having to figure out new identities in the cultural surround.”

In her travels and radio appearances after the book was published, Lawrence-Lightfoot said its themes resonated with the public.

“There were taxi drivers in New York City and Boston, people of all racial backgrounds, all walks of life, all saying the same thing: ‘Professor, you’re talking about me,’ or ‘That’s my story,’ ” Lawrence-Lightfoot said.

The Harvard Institute for Learning in Retirement (HILR) is one home for some of those seeking to expand their horizons after their work lives end. HILR is a unique, peer-learning institution that attracts engaged retirees who serve as both students and teachers. Classes follow a seminar format. Discussions are lively and informed, according to director Leonie Gordon, but there are neither exams nor degrees involved. The study groups are supplemented by distinguished outside speakers, as well as by theatrical and musical performances.

Gordon said the institute has seen the age of its 520 active members gradually increase over its 34 years until now one in four is over 80.

“We see people living out their lives in a strong, intellectual way,” Gordon said. “When you read Dostoyevsky again in your 60s and 70s, you are likely to bring a different understanding to the text than you did in your 20s.”