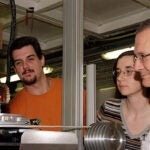 Organizational partnerships, the training of local medical personnel, and increased engagement by academic medical centers to deliver care where it’s needed are all important if the present push to improve global health is to have lasting results, according to speakers at a Massachusetts General Hospital (MGH) symposium.

The all-day event, “Broadening the Response: The Role of Academic Medical Centers in Global Health,” was held on Friday (Nov. 12) at the Boston Convention and Exhibition Center and attracted prominent speakers such as U.S. Sen. John Kerry; Paul Farmer, Maude and Lillian Presley Professor of Global Health and Social Medicine and co-founder of the nonprofit Partners In Health; and Bruce Walker, professor of immunology and infectious diseases and head of the Ragon Institute of MGH, MIT and Harvard. Speakers also included health care officials and researchers from several developing nations, including Liberia, Uganda, and South Africa.

Though progress has been made in improving global health in recent years through programs and organizations such as the President’s Emergency Plan for AIDS Relief (PEPFAR), the Global Fund to Fight AIDS, Tuberculosis and Malaria, and Partners In Health’s pioneering work in Haiti, Rwanda, and other developing nations, much work remains to be done, speakers said.

Kerry, who as chairman of the Senate’s Committee on Foreign Relations has played a prominent role in passing key global health-related legislation, praised the work of many in the room and said that improving health is important not just for humanitarian reasons, but for strategic ones as well. The world is more interconnected than ever, and those countries with healthier populations are more stable, making them stronger partners for the United States as it seeks to carry out its aims around the world.

Indeed, with modern transportation moving people across faraway borders in just hours, Kerry said, American lives may well depend on other nations’ abilities to keep their people healthy and meet emergencies caused by ailments such as SARS, avian flu, or drug resistant tuberculosis.

Though much has been done by the U.S. government, including PEPFAR and the Obama Administration’s Global Health Initiative, Kerry called on the audience to join the battle not just on global health’s front lines, but in Washington, D.C.

With the recent election putting a Republican majority in the U.S. House, Kerry added, funds spent on global health programs and for government organizations like the U.S. Agency for International Development will be questioned anew and will need champions like those at the symposium to make the case for why they’re needed.

The event was hosted by David Bangsberg, director of the MGH Center for Global Health and associate professor at Harvard Medical School. Bangsberg said that an important question concerns how academic medical centers, which are engaging in global health in growing numbers, can best make a difference.

Walter Gwenigale, on leave from his post as minister of health and social welfare of Liberia, described the difficulties facing that African nation after years of civil war. Gwenigale said Liberia is currently rebuilding its medical school, hospitals, and research labs, and though health is one of the top expenditures in the country’s budget, the nation needs additional funds to meet its needs. As important, however, is medical training. Many health professionals fled the country during the fighting, so Liberia needs help from institutions like MGH to rebuild its corps of doctors, nurses, and health workers, Gwenigale said.

With MGH’s 200th anniversary coming next year, President Peter Slavin said that the hospital’s work in global health is just an extension of its history of helping communities in and around Boston. Slavin quoted from a letter by its founding physicians, who wrote, “when in distress, every man becomes our neighbor.” The doctors were talking about Boston’s poor in making their argument to establish the nation’s third general hospital. Slavin said the argument applies to MGH’s surrounding communities and to those needing medical care around the world.