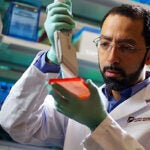 Harvard scientists at Dana-Farber Cancer Institute say they have for the first time partially reversed age-related degeneration in mice, resulting in new growth of the brain and testes, improved fertility, and the return of a lost cognitive function.

In a report posted online by the journal Nature in advance of print publication, researchers led by Ronald A. DePinho, a Harvard Medical School (HMS) professor of genetics, said they achieved the milestone in aging science by engineering mice with a controllable telomerase gene. The telomerase enzyme maintains the protective caps called telomeres that shield the ends of chromosomes.

As humans age, low levels of telomerase are associated with progressive erosion of telomeres, which may then contribute to tissue degeneration and functional decline in the elderly. By creating mice with a telomerase switch, the researchers were able to generate prematurely aged mice. The switch allowed the scientists to find out whether reactivating telomerase in the animals would restore telomeres and mitigate the signs and symptoms of aging. The work showed a dramatic reversal of many aspects of aging, including reversal of brain disease and infertility.

While human applications remain in the future, the strategy might one day be used to treat conditions such as rare genetic premature aging syndromes in which shortened telomeres play an important role, said DePinho, senior author of the report and the director of Dana-Farber’s Belfer Institute for Applied Cancer Science. “Whether this would impact on normal aging is a more difficult question,” he added. “But it is notable that telomere loss is associated with age-associated disorders and thus restoration of telomeres could alleviate such decline.” The first author is Mariela Jaskelioff, a research fellow in medicine in DePinho’s laboratory.

Importantly, the animals showed no signs of developing cancer. This remains a concern because cancer cells turn on telomerase to make themselves virtually immortal. DePinho said the risk can be minimized by switching on telomerase only for a matter of days or weeks — which may be brief enough to avoid fueling hidden cancers or cause new ones to develop. Still, he observed, it is an important issue for further study.

In addition, DePinho said these results may provide new avenues for regenerative medicine, because they suggest that quiescent adult stem cells in severely aged tissues remain viable and can be reactivated to repair tissue damage.

“If you can remove the underlying damage and stresses that drive the aging process and cause stem cells to go into growth arrest, you may be able to recruit them back into a regenerative response to rejuvenate tissues and maintain health in the aged,” he said. Those stresses include the shortening of telomeres over time that causes cells and tissues to fail.

Loss of telomeres sends a cascade of signals that cause cells to stop dividing or self-destruct, stem cells to go into retirement, organs to atrophy, and brain cells to die. Generally, the shortening of telomeres in normal tissues shows a steady decline, except in the case of cancer, where they are maintained.

The experiments used mice that had been engineered to develop severe DNA and tissue damage as a result of abnormal, premature aging. These animals had short, dysfunctional telomeres and suffered a variety of age-related afflictions that progressed in successive generations of mice. Among the conditions were testes reduced in size and depleted of sperm, atrophied spleens, damage to the intestines, and shrinkage of the brain along with an inability to grow new brain cells.

“We wanted to know: If you could flip the telomerase switch on and restore telomeres in animals with entrenched age-related disease, what would happen?” explained DePinho. “Would it slow down aging, stabilize it, or even reverse it?”

Rather than supply the rodents with supplemental telomerase, the scientists devised a way to switch on the animals’ own dormant telomerase gene, known as TERT. They engineered the endogenous TERT gene to encode a fusion protein of TERT and the estrogen receptor. This fusion protein would only become activated with a special form of estrogen. With this setup, scientists could give the mice an estrogen-like drug at any time to stimulate the TERT-estrogen receptor fusion protein and make it active to maintain telomeres.

Against this backdrop, the researchers administered the estrogen drug to some of the mice via a time-release pellet inserted under the skin. Other animals, the controls, were given a pellet containing no active drug.

After four weeks, the scientists observed remarkable signs of rejuvenation in the treated mice. Overall, the mice exhibited increased levels of telomerase and lengthened telomeres, biological changes indicative of cells returning to a growth state with reversal of tissue degeneration, and increase in size of the spleen, testes, and brain. “It was akin to a Ponce de León effect,” noted DePinho, referring to the Spanish explorer who sought the mythical Fountain of Youth.

“When we flipped the telomerase switch on and looked a month later, the brains had largely returned to normal,” said DePinho. More newborn nerve cells were observed, and the fatty myelin sheaths around nerve cells — which had become thinned in the aged animals — increased in diameter. In addition, the increase in telomerase revitalized slumbering brain stem cells so they could produce new neurons.

To show that all this new activity actually caused functional improvements, the scientists tested the mice’s ability to avoid a certain area where they detected unpleasant odors that they associated with danger, such as scents of predators or rotten food. They had lost that survival skill as their olfactory nerve cells atrophied, but after the telomerase boost, those nerves regenerated and the mice regained their crucial sense of smell.

“One of the most amazing changes was in the animals’ testes, which were essentially barren as aging caused the death and elimination of sperm cells,” recounted DePinho. “When we restored telomerase, the testes produced new sperm cells, and the animals’ fecundity was improved — their mates gave birth to larger litters.”

The telomerase boost also lengthened the rodents’ life spans compared to their untreated counterparts — but they did not live longer than normal mice, said the researchers.

The authors concluded, “This unprecedented reversal of age-related decline in the central nervous system and other organs vital to adult mammalian health justifies exploration of telomere rejuvenation strategies for age-associated diseases.”

Other authors include members of the DePinho research group and Eleftheria Maratos-Flier, an HMS professor of medicine at Beth Israel Deaconess Medical Center.

The research was supported by grants from the National Institutes of Health and the Belfer Foundation.