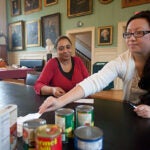 Giving thanks to each other

Adela Penagos works in Cambridge, but her thoughts are never far from Mexico. The new director of Harvard’s Advising Programs Office (APO) grew up in Cordóba, Veracruz, and still has most of her relatives and many friends there. When flooding from Hurricane Karl left thousands of the town’s residents displaced in mid-September, Penagos worried, but also took comfort in the knowledge that her community is tight-knit.

“People have lived there for generations,” she says. “They support each other in good times and bad.”

At Harvard, Penagos helps create a support system that’s there for students in good times and bad. Formed in 2006 as a result of Harvard’s curricular review, the APO coordinates academic advising programs for all undergraduates—from peer advisers and proctors who help freshmen make the adjustment to college life, to concentration advisers who guide students through their chosen areas of study.

“The goal of the advising structure is to maximize the talents of students that come to Harvard so that they can reach their full potential,” Penagos said. “I oversee the different programs. That means working closely with first-year, sophomore, and concentration advisers. It’s my job to make these great programs even better if I can.”

If Penagos’ track record is any indication, she’ll do much to improve advising at Harvard, particularly for students from underprivileged backgrounds. During nearly 12 years as an administrator at the University of Notre Dame in South Bend, Ind., she provided support services to more than 3,000 undergraduates and created a mentoring program for students from underresourced high schools. The result was a significant increase in grade point average for participants, seven of whom became Fulbright scholars.

“Before, to my knowledge, there were no students from underresourced high schools who had won a Fulbright,” she says. “Many didn’t know about the opportunities that were available to them and didn’t have anyone to lead the way. If people from the university don’t make them aware, they can miss out on things that are common knowledge to everyone else.”

Penagos, who earned a master’s degree in Spanish literature at Notre Dame, also worked with the school’s career director on initiatives for minorities and underprivileged students.

“The director would get people from various companies — Procter & Gamble, General Mills, and others — that were interested in helping out this population,” she says. “We would partner with them. We also had a program that helped students practice interview skills. We had resume critiques. It was about passing on the social capital people need to succeed.”

For her work, Penagos received a presidential award for “bringing about radical positive change in the university” and was promoted to assistant dean. She was happy with her success, but wanted an opportunity to work at a more diverse campus, leading a group that brought together academics, residential life, and other important aspects of the undergraduate experience. She also wanted to continue to work at an institution that, like Notre Dame, had a strong sense of pride and tradition. When a friend told her that Harvard’s APO was looking for a new director, she thought the job might be a good fit. After a few interviews, she was convinced.

“The people I met here were really committed to advising,” she says. “Many had left and come back. They said, ‘There’s no place like Harvard.’ It meant a lot to me to see such institutional commitment. If people love the University, they’re more likely to give 120 percent than if they look at it as just a business. I wanted to be part of such a wonderful team.”

Penagos took the reins at the APO late last August. Her first priority was to get a comprehensive overview of Harvard’s undergraduate advising structure. To do so, she met with everyone from first-year peer advising fellows to faculty and deans.

“I spent a lot of time and took as many notes as I could so that I got to see what’s working and what’s needed,” she explains. “I wanted to meet as many people as I could to get their outlook on the programs we coordinate here and to get the outlook for the institution.”

One area she hopes to improve is the APO’s work with fields of concentration. Penagos says she wants to get a better understanding of the type of advising that goes on in students’ areas of study so that the APO can work more closely with advisers and provide support.

“I am taking on Dean of Harvard College Evelynn Hammonds’ charge of ‘building an integrated advising and mentoring system for our students,” she says. “I want to identify the best ways to support and to encourage them to succeed academically, in the face of personal, social, and cultural obstacles.”

Penagos is particularly plugged in to the academic side of undergraduate life because of her own studies. She holds a Ph.D. from Boston University in Hispanic language and literatures, and has taught in the field since 1989. At Notre Dame, Penagos held a faculty appointment in Romance languages. She says she’s open to teaching at Harvard as well.

“I’ve always taught, even when I was advising,” she says. “I’d love to teach undergraduates here and get to know them in an academic setting.”

For now, though, Penagos says she will focus on developing a new vision for the advising system at the College.

“I have an idea of where I’d like things to be,” she says. “Everybody looks at what Harvard is doing. It would be nice if people could look at us and say, ‘This is the advising model we’re going to follow.’”