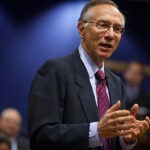 The rise of chronic disease

Just three years after the high-profile failure of an AIDS vaccine trial sent researchers back to the drawing board, optimism is again rising about the prospects of protecting humanity from a disease that ranks among the deadliest in history.

Seth Berkley, president and chief executive officer of the International AIDS Vaccine Initiative (IAVI), outlined new approaches, new discoveries, and one moderately successful recent vaccine trial that he said paves the way for real progress toward ending a pandemic that in 2008 alone infected an estimated 2.7 million and killed 2 million.

Though the spread of antiretroviral treatment to the developing world has improved the prognosis of those getting the drugs, the drugs are still unavailable to many, which means that HIV/AIDS remains a killer for most sufferers, Berkley said.

Berkley spoke Tuesday (Nov. 9) at the Harvard School of Public Health (HSPH), where he delivered a Dean’s Distinguished Lecture on the subject. HSPH Dean Julio Frenk introduced Berkley, calling the AIDS pandemic “the single most important public health crisis in the history of humankind.”

In 2007, the failure of a vaccine trial by pharmaceutical giant Merck sent a wave of pessimism crashing over the AIDS vaccine community. Considered at the time the most advanced candidate for a successful vaccine, its failure — and the evidence that it might have actually increased the risk of contracting HIV — left researchers feeling as if they had to start from scratch.

In the years since, however, several breakthroughs have advanced vaccine efforts, Berkley said. One is the discovery of 15 antibodies in humans that provide new avenues through which to attack the virus. A second is the promise shown by new viral vectors — used to deliver a vaccine to the target — and the third is a 2009 trial in Thailand of a vaccine that appears to have provided protection against HIV for about 30 percent of those inoculated. While Berkley said the Thai trial provided just “modest” protection, it has raised hope that a more potent vaccine can be developed.

“It is a really exciting time in AIDS vaccines. We are in an AIDS vaccine renaissance,” Berkley said. “The science is moving on as we are talking.”

Despite his optimism, Berkley said that creating a vaccine against HIV remains a major scientific challenge. The primary reason HIV is so difficult to protect against is that the virus mutates very rapidly, so a vaccine that protects against one strain or substrain may provide little or no protection against another.

The discovery of the new antibodies, some of which are particularly potent against HIV, offers both new candidates for a vaccine and new strategies short of development of a full vaccine. The antibodies themselves could be injected as a temporary immunization measure, much as gamma globulin was once given to protect against hepatitis A.

Work toward a vaccine involves both branches of the human immune system, Berkley said. In addition to the branch that uses antibodies to destroy invading pathogens, the second branch of the immune system, called cell-mediated immunity, sends natural killer cells, macrophages, and other immune cells to attack invaders. Berkley said several efforts are under way to mobilize cell-mediated immunity against HIV.

Researchers are also focusing on the best way to deliver a vaccine. Results on self-replicating vectors that multiply inside the body have been promising in laboratory monkeys, he said. Using the monkey analog to HIV, the simian immune virus, or SIV, research with self-replicating viral vectors has shown promising results, with 54 percent of those vaccinated able to entirely clear the virus from their bodies.

Harvard’s teaching hospitals are among those institutions involved in vaccine development efforts, with Massachusetts General Hospital and Beth Israel Deaconess Medical Center teaming up on one effort in clinical trials, together with IAVI and other collaborators.

Berkley said it’s important to think about delivering a vaccine where it’s most needed once it’s developed. Though some believe that delivery of a vaccine to the developing world would naturally be a high priority, he said recent history with the vaccine against human papillomavirus (HPV) — a leading cause of cervical cancer — shows that it will take more than assumptions to deliver vaccines where they’re needed. Though the HPV vaccine was licensed in 2006, it is still unavailable in most of the developing world, Berkley said.