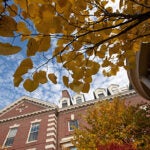 It was sunny and summery on Saturday (Nov. 13), which broke the drear spell of autumn. So what were the odds of enticing 100 people to stay inside — and listen to lectures on statistics?

The odds were excellent. That many people attended the inaugural David K. Pickard Memorial Lecture at Maxwell Dworkin. The program was named for a junior faculty member in statistics who died young, but not before winning every major Harvard undergraduate-teaching award for his passion, accessibility, patience, and clarity.

“I literally gasped when I saw David’s record,” said Statistics Department Chair Xiao-Li Meng. He called the afternoon symposium a way of expressing “belated but deep gratitude” to Pickard for inspiring a generation of young scholars to become passionate teachers themselves.

“Henceforth, the name ‘Pickard’ is going to be synonymous with great teaching,” said Carl N. Morris, a 20-year veteran of Harvard’s statistics faculty.

The Canada-born Pickard — dashing, athletic, and an authority in something called the Ising model — did his doctoral work in Australia and taught at Harvard from 1977 to 1985. He died of brain cancer in 1986, shortly after moving to Queen’s University in Kingston, Ontario.

Pickard exemplified a “sea change” in the way Harvard teaches its undergraduates, said statistician Judith Singer, the James Bryant Conant Professor of Education at the Harvard Graduate School of Education and senior vice provost for faculty development and diversity.

Honoring Pickard, she added, came at a critical time in a complicated world, when students more than ever have to be “statistically accurate and statistically literate.”

For the young scholar, dead too soon, teaching began at home. For one thing, he came from a long line of Canadian mathematicians and scientists. For another, his children felt the heat and light of Pickard’s pedagogical skills. His daughter Darcy, who was in the audience Saturday, is a senior statistician with a British Columbia ecological consulting firm. His son, Damon, is a Kingston paramedic who was 15 when his father died.

Damon remembered a vital man who turned card games into lessons on probability, backyard basketball into calculations of optimal throwing arcs, and a neighborhood tree into a lesson on determining height through trigonometry.

“Teaching was in his blood,” said Damon. “His life was short. But by all standards, and by all accounts, it was full.”

The Pickard lecture, endowed by alumni contributions, will be a biennial affair. The conference was co-organized by Victor Solo, who taught statistics with Pickard at Harvard from 1980 to 1985, and who is now back in his native Australia at the University of New South Wales.

He invited the audience to study a picture of the smiling and handsome Pickard. “The first thing is: This guy is a happy man,” he said, one who brought that joy to the classroom, along with confidence, peace, humility, and verve.

Add in a sense of adventure. Pickard and his wife, Dale, spent two years teaching in a village high school in Sierra Leone. He continued to ponder statistics there, she said, and came away with “some big ideas.”

“He made the difficult understandable,” said Harvard Ph.D. alumnus Colin Goodall, now on the technical staff at AT&T.

The perpetual fund in Pickard’s name will pay for the biennial lecture, for a biennial junior faculty award for teaching and mentoring, and for awards related to a new graduate student honor, the Pickard Teaching Fellows. (Winning this year were doctoral students Kevin Rader, Cassandra Wolos Pattanayak, and Xianchao Xie — who is known around the department as “Double X.”)

The winner of the first Pickard mentoring award was Assistant Professor Joseph K. Blitzstein, co-director of undergraduate studies in the Statistics Department, who himself is starting to rack up Pickard-esque awards for teaching.

Blitzstein, whose mother traveled from Los Angeles to be in the audience, got to show off his teaching chops with a historical lecture on British logician and mathematician Alan Turing (1912-1954), who is widely regarded as the father of modern theoretical computer science. “He was one of the first computer scientists — before there were computers,” said Blitzstein.

During World War II, Turing was part of a cryptography team that cracked the Enigma ciphers used by the German military. But by 1952 he was on trial for being openly gay, under the same “gross indecency” statute used against writer Oscar Wilde more than five decades earlier. Convicted, Turing was offered two choices: prison, or chemical castration by massive injections of estrogen. He chose the latter, and two years later committed suicide.

Professionally, Turing is now best known for the conceptual and computational work that made computers possible, and for the “Turing test” — still the standard for determining the “intelligence” of a computing machine. But statistics drew his attention as well. Starting with his wartime work, Turing anticipated empirical Bayesian methods. The Bayes factor is now a standard tool in statistical inference, but it was rarely used then.

Delivering the first Pickard Memorial Lecture was University of Toronto statistics Professor Jeffrey Rosenthal, whose popular 2005 book “Struck By Lightning: The Curious World of Probabilities” has made him a favorite expert with Canadian print, radio, and television reporters.

He talked about his experiences with the media, including “statistical ideas that work on TV.” It was an improbable topic at an academic conference, but one that lit a fire under an audience of authorities on data mining, inference, and regression — concepts that fail to light a fire under most reporters.

Solo, the Australian scholar, had an immediate idea: Establish a professorship at Harvard like the one at the University of Cambridge, the Winton Professor of the Public Understanding of Risk. Perhaps it’s time, he said, “to step into the ring.”

Rosenthal, who earned a Harvard mathematics Ph.D. at age 24, rolled through a sequence of topics that would be likely to prompt interest from the media.

High on the list, of course, was winning the lottery. The secret, Rosenthal said, is not just giving reporters the odds — a 14 million to 1 chance of winning, for instance. Give them an analogy too — the idea, for instance, that winning that same lottery is likely to occur only once every 270,000 years.

Then there are the odd media requests: Write something on the board — anything. Get man-on-the-street reactions to your odds. Or in the case of a weather story, report your statistics while out in the wind and the rain. “That’s the way the media works,” said Rosenthal, a veteran of doing all this (and more) on camera.

Then there are those times when public feelings contradict the scientific facts. The homicide rate in Toronto one year was so bad that the streets were “bathed in blood,” went one report. In fact, that year Toronto was statistically safer than many other cities in Canada. “You say: Let’s look at the facts,” said Rosenthal. “Of course, there are no headlines in that.”

Then there are coincidences, another favorite with headline writers. Rosenthal told the story of one that on face value represented a “1 in 36 billion billion” probability of happening. But when subjected to more rigorous testing, the coincidence in fact had a 38 percent chance of happening. He said reporters hated that, because there was no headline.

In the end, as crude as the results may be, reaching out to the media “is one way to teach,” said Rosenthal. “It’s the only media we have. To reach those … millions, there are no other options.” In the end, he said, “our society will be better if people think more logically.”

After the symposium, nearly everyone stayed for a catered Chinese dinner, while authorities on probability and the Bayes’ theorem jitterbugged, belted out the blues on hot guitars, blazing keyboards, and — well, OK — one trombone. What are the odds of great music (and dancing) from people who always did their math homework? They were excellent.

Rosenthal started the music program on the keyboards by singing a statistician’s version of “Yesterday.” All of their advances in teaching, for one, gave the lie to the spoof’s first line: “Yesterday, students came to class but didn’t stay.”

Among the conference guests was 7-year-old David C. Pickard, who survived his grandfather’s academic memorial by reading workbooks and skipping one of the lectures to get ice cream with his mother.

After dinner, armed with chopsticks and equipped with Harry Potter glasses, he dodged professors and practiced karate kicks, but he paused to say, “I love math.”