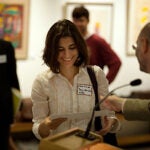 “Supporting the supply of affordable housing in Cambridge and Boston is just one of the many ways that Harvard is working to improve our local communities,” said Harvard President Drew Faust. “We are pleased to join with the leadership of both cities on the 20/20/2000 initiative, which has helped to finance nearly one out of every six units built in Cambridge and Boston and provided many local working families with homes.”

Boston Mayor Thomas M. Menino, who attended the ribbon cutting of the Doña Betsaida Gutiérrez Housing Cooperative on Oct. 30, said: “Quality, affordable housing means so much to families across the city, and the 20/20/2000 program demonstrates the value of the creative and productive partnerships that enable such progress.” Menino has been a champion of affordable housing throughout his 17 years as mayor.

Harvard 20/20/2000 was created in response to a growing need for affordable housing following the end of rent control in the 1990s, during which Boston and Cambridge witnessed skyrocketing housing costs while federal and state resources declined. Leaders in Boston and Cambridge made increasing the supply of affordable housing a priority, and Harvard responded with the initiative that included $10 million of low-interest loans to nonprofit housing agencies in each city, coupled with $1 million in direct grants to local agencies to explore innovative approaches to developing affordable housing.

“We are grateful for this critical and timely investment,” said Phil Giffee, executive director of the Neighborhood of Affordable Housing (NOAH), whose agency used Harvard’s innovative 20/20/2000 resources to help build an attractive, 14-unit, first-time homebuyer project overlooking the inner harbor in East Boston. “The low-interest Harvard funds were essential to leveraging the $4.8 million in project funding,” added Giffee.

The 14 families in the NOAH development today are among 665 who became new homeowners through projects funded in part by 20/20/2000.

The Cambridge-based community development organization Just-a-Start tapped the 20/20/2000 initiative for $8.4 million in low-interest loans, which helped to fund the creation and renovation of 100 units in 10 Just-a-Start housing projects. “The 20/20/2000 funds we received were an immensely valuable resource,” said Gordon Gottsche, Just-a-Start’s executive director. “Funds like these are impossible to find, and in many cases are the critical element that can make projects like these possible.”

To view an interactive map with all 120 development projects that have received 20/20/2000 funding in Boston and Cambridge.