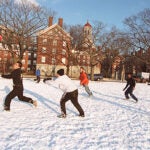 The goal of the Portraiture Project is to reflect the diversity of individuals who have served Harvard University for 25 years or more with distinction by honoring their notable service with a portrait. Those honored include (but are not limited to) persons of African American, Asian American, Latino American, and Native American backgrounds who deserve special recognition. The Portraiture Committee is chaired by the Rev. Professor Peter J. Gomes and coordinated by Counter, and its members consist of Harvard College students and faculty.

Pierce is one of Harvard’s most distinguished graduates. He has served on the faculties of Harvard Medical School, Harvard Graduate School of Education, and Harvard School of Public Health. He spent 41 years as a Harvard professor, and is revered by his many students as a brilliant, scholarly, kind, and humble professor who brought great dignity and honor to his profession and to the Harvard community. His portrait resides in the Junior Common Room of Lowell House, Pierce’s residence hall while a student.

For a complete list of portraits, visit the Harvard Foundation.