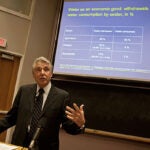 But research conducted in recent years by Davis, members of his lab, and collaborators from Richard Primack’s laboratory at Boston University, has shown that genetic relationships can provide key clues to which plants will succeed and which will do poorly as the globe continues to warm.

The Walden Pond research, published in 2008, showed a definite shift in the plant community since Henry David Thoreau spent time there, with invasive plant species on the upswing and charismatic native plants, such as orchids, roses, and dogwoods, on the decline.

Examination of climate change’s Walden Pond winners and losers shows that out of the host of possible traits that could be determining success or failure in a changing world, the ability of plants to adjust their flowering time to keep up with earlier spring warming seems to be key.

The exact reason for this has not been established, Davis said, but it could be due to a plant’s ability to flower when its key pollinators are active. As spring arrives earlier, insects stir from their winter hiding places earlier. Plants dependent on that insect must produce blooms when those insects are active or their flowers go unpollinated. Other factors are possible as well, Davis said, such as earlier plants getting a jump on growth, allowing them to shade out or crowd out later-starting competitors.

One key finding of that research, Davis said, is that plants that have trouble adjusting to shifting climate have common genetic roots. Those relationships can be used to predict how related species around the world might be affected by similar changes, even if those species haven’t been studied by scientists.

A recent commentary by Davis and co-authors highlighted a potential problem in an area of South Africa that has very high species diversity, but whose multitude of species come from relatively few genetic lineages. If these species, which include Walden Pond strugglers such as orchids and irises, are subjected to similarly changing climatic conditions, botanists might expect them to suffer similar declines.

It is these sorts of associations, Davis said, that it is important for evolutionary biologists to help make. With help from collaborators, he has already begun the process, examining how orchids are doing in the United Kingdom, which because of the buffering effect of the Atlantic Ocean, does not appear to be undergoing orchid-threatening climate changes.

“Maybe we need to focus our efforts on groups of related species like roses and orchids and lilies because they’ve been in decline and not on legumes and mustards, which are doing well,” Davis said. “We know those groups of species that don’t seem to be able to adjust their responses, those species that, with increased temperatures, can be expected to continue to decline. So you can decide what you want to do. Do you want to let them ride into the sunset? Do you want to do some kind of assisted migration of species from warmer climes?”

While evolutionary biologists’ knowledge of the genetic relationships between species, called phylogeny, is important, Davis said the continued involvement of ecologists is also important. Davis’ own Walden Pond research has been greatly assisted by his Boston University ecologist colleagues, he said, and, while that work showed that evolutionary relationships are a possible way of understanding future detrimental effects of climate change, it was less useful in predicting which plants will do especially well.

That’s because the ability to shift flowering time — a key trait in plants doing well at Walden — appears to be scattered among a variety of different groups of plants. Perhaps not coincidentally, these plants, Davis said, also seem to be invasive non-native plants, which are adaptable and spread readily. Purple loosestrife, for example, is a native of Europe and Asia. Its purple flowers, which open on average three weeks earlier than in the past, are increasingly seen in American wetlands.

Davis’ climate change work spans not just geographical distance, but temporal distance as well. With help from colleague Eric Dechaine at Western Washington University, he is gathering data from fossilized squirrel middens in Alaska from as long ago as 100,000 years to examine how plant communities — whose seeds are preserved in the dung — responded to ancient eras of climate change.

“Thoreau as Climatologist: Tracking 160 Years of Climate Change,” a talk by Charles Davis, will be held on Nov. 18 at 6 p.m. For more information.