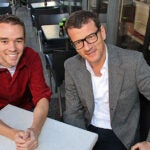 Study of bilinguals suggests such switches can help to shape preferences

The language we speak may influence not only our thoughts, but our implicit preferences as well. That’s the finding of a study by Harvard psychologists, who found that bilingual individuals’ opinions of different ethnic groups were affected by the language in which they took a test probing their biases and predilections.

Implicit attitudes, positive or negative associations that people may be unaware that they possess, have been shown to predict behavior toward members of social groups. Recent research has shown that these attitudes are quite malleable, susceptible to factors such as the weather, popular culture, or, now, by the language people speak.

“Can we shift something as fundamental as what we like and dislike by changing the language in which our preferences are elicited?” asked co-author Mahzarin R. Banaji, the Richard Clarke Cabot Professor of Social Ethics at Harvard. “If the answer is yes, that gives more support to the idea that language is an important shaper of attitudes.”

Ogunnaike, Banaji, and Yarrow Dunham, now at the University of California, Merced, used the well-known Implicit Association Test (IAT), where participants rapidly categorize words that flash on a computer screen or are played through headphones. The test gives participants only a fraction of a second to categorize words, not enough to think about answers.

“The IAT bypasses a large part of conscious cognition and taps into something we’re not aware of and can’t easily control,” Banaji said.

The paper appears in the latest issue of the Journal of Experimental Social Psychology.

The researchers administered the IAT in two settings: once in Morocco, with subjects who spoke Arabic and French, and again in the United States, with Latinos who spoke English and Spanish.

“It was quite shocking to see that a person could take the same test, within a brief period of time, and show such different results,” Ogunnaike said. “It’s like asking your friend if he likes ice cream in English, and then turning around and asking him again in French and getting a different answer.”

In the Moroccan test, participants saw “Moroccan” names (such as Hassan or Fatimah) or “French” names (such as Jean or Marie) flash on a monitor, along with words that are “good” (such as happy or nice) or “bad” (such as hate or mean). Participants might press one key when they saw a Moroccan name or a good word, and press another when they saw a French name or a bad word. Then the key assignments are switched so that “Moroccan” and “bad” share the same key, and “French” and “good” share the other.

Linguist Benjamin Lee Whorf first posited in the 1930s that language is so powerful that it can determine thought. Mainstream psychology has taken the more skeptical view that while language may affect thought processes, it doesn’t influence thought itself. This new study suggests that Whorf’s idea, when not caricatured, may generate interesting hypotheses that researchers can continue to test.

“These results challenge our views of attitudes as stable,” Banaji said. “There still remain big questions about just how fixed or flexible they are, and language may provide a window through which we will learn about their nature.”

Ogunnaike, Dunham, and Banaji’s work was supported by Harvard’s Weatherhead Center for International Affairs and the Mellon Mays Foundation.