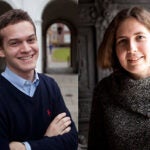 At its annual meeting Nov. 18-21, the Middle East Studies Association (MESA) announced a new book award named for Professor Roger Owen of Harvard’s Center for Middle Eastern Studies (CMES). The Roger Owen Book Award will recognize work on the economics, economic history, or political economy of the Middle East and North Africa in the modern period, and will be awarded biennially to a single recipient.

In the announcement of the award, MESA stated, “The purpose of the award is to honor the work of Roger Owen, A.J. Meyer Professor of Middle East History at Harvard University, and to encourage new scholarship incorporating economics and economic factors.”

Owen is a pre-eminent scholar of the economic and political history of the modern and early modern Middle East. He served as director of CMES from 1996 to 1999, and is one of the center’s core faculty members.

“We are grateful for MESA’s recognition of the importance of Professor Owen’s contribution to the field,” said CMES Director Baber Johansen. “MESA’s creation of a book award in Roger Owen’s name is, we think, a wonderful way to honor a great scholar.”