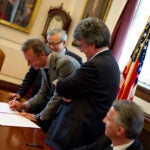 Researcher probes key genes for clues to evolution from dinosaurs

Birds and alligators have little in common, other than that the first is sometimes the other’s lunch. That hasn’t always been the case, though, and that’s what attracts Arkhat Abzhanov.

Alligators and birds are part of the same larger group, called archosaurs, which has existed for 250 million years and which has given rise not only to birds and crocodilians, but also to dinosaurs. Though dinosaurs are now extinct, the crocodilians, such as alligators, crocodiles, and narrow-jawed gharials live on, and scientists see in them many characteristics of the primitive archosaurs.

To Abzhanov, an assistant professor of organismic and evolutionary biology at Harvard who studies birds and how they developed, researching alligators gives him the chance to compare birds to something akin to their ancestors.

“It’s really about opening a door to understand what happened in avian evolution to come up with their unique body plan,” Abzhanov said. “How did it evolve? What actually happened?”

Millions of years ago, archosaurs diverged into several groups, scientists say. One became modern crocodilians, and another dinosaurs. The dinosaurs evolved many forms, including the smaller and feathered kind, like the archaeopteryx, which is considered ancestral to modern birds.

“Archaeopteryx is a good example of a feathered dinosaur that could fly,” Abzhanov said. “It’s actually now hard to say where dinosaurs end and birds begin.”

Modern birds do have many unusual features, including beaks and skulls with fused sutures. Their wings are modified forelimbs, and their backbones evolved to allow for flexible necks, waists, and fused lower vertebrae that form rigid foundations for tail feathers, called pygostyles.

Crocodilians retained many of the characteristics of the primitive archosaurs, such as a more complex skull with bones lost in avian evolution, a large body, and a more conserved body plan.

“If you look at the entire archosaur branch, we have one of the most derived groups, birds, still around,” Abzhanov said. “Unfortunately, we don’t have the intermediate group in dinosaurs, but we have crocodilians, one of the most basal groups.”

In ongoing work that already has resulted in two scientific papers, Abzhanov examined alligator and bird embryos and compared the functioning of key developmental HOX genes. Prior research showed that HOX genes turn on and off at key points in an animal’s development and are responsible for the orderly growth of body segments. They ensure, in effect, that the head goes at the top, the feet at the bottom, and everything else in the proper positions in between.

HOX genes are so important in animal development that they’ve been highly conserved across millions of years of evolution. Even jellyfish have three — front, middle, and back. Birds and alligators have 13 groups of HOX genes. Some of the key differences in their body plans are related to HOX-controlled neck and lower-back development. Abzhanov is examining those genes and the effects of the proteins they produce, called transcription factors, to get at the root of those differences.

First, he looked at HOX genes from groups four and five, which control neck development in chick and mouse embryos. In alligators, the vertebrae forming the neck have cervical ribs, similar to the chest, and thus very little flexibility, which is why alligators have to turn their whole bodies to move their heads around. Such a condition is considered ancestral to all archosaurs and, in fact, all land vertebrates.

Birds, on the other hand, couldn’t be more different. From the long, elegant neck of the swan to the rotationally flexible neck of the owl, birds’ neck vertebrae are ribless, allowing the head a lot of movement without having to turn the body.

Abzhanov asked similar questions about the lower back, or lumbar region. Alligators’ lumbar vertebrae also sport short ribs and bestow little flexibility, also an ancestral feature. The backbones of birds lose their ribs as they approach the waist — a feature shared by some mammals, including humans — permitting flexibility. While the functioning of HOX genes in birds was known, their expression and operation in alligators largely was not, Abzhanov said.

When he examined the HOX genes responsible for neck and lower-back development, though, the mystery deepened. Despite the very different developmental outcomes in birds and alligators, the genes themselves were expressed in pretty much the same domains in the two animals. HOX genes themselves also appear to be very similar in birds and alligators.

The search is now leading Abzhanov deeper into the alligator and bird genome, and farther along the path of how HOX genes function. HOX genes are called master genes because the transcription factors they produce control the functioning of many other genes. Abzhanov believes the differences in alligator and bird bodies are due to different responses to those transcription factors in other genes.

“What’s changed [between alligators and birds] is the interaction between HOX genes and downstream targets,” Abzhanov said. “What’s happening is the downstream genes lose, gain, or change binding sites for HOX [transcription factors]. Otherwise, the stage is set for the future body plan changes — the HOX genes were already deployed to allow for evolution of future distinct neck and lumbar regions.”

The added complexity is not entirely unexpected, Abzhanov said. Because HOX genes control many downstream genes that do different things, changing the functioning of a HOX gene would produce many changes, not all desirable. From an evolutionary standpoint, it makes more sense to alter the sensitivity of downstream genes to HOX transcription factors, changing a single gene at a time.

“It is a bit like building a house. You have the same bricks, the same tools, but buildings can come out differently,” Abzhanov said. “It’s how and when you use these tools that’s important.”