‘Another set of fingers’ 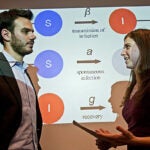 An interdisciplinary group of leading Harvard geneticists and stem cell researchers has found a new genetic aspect of cell reprogramming that may ultimately help in the fine-tuning of induced pluripotent stem cells (iPS) into specific cell types.

The researchers, who have affiliations with the Harvard Stem Cell Institute (HSCI), the Broad Institute of Harvard and MIT, Harvard’s Department of Stem Cell and Regenerative Biology (SCRB), Children’s Hospital Boston, and Beth Israel Deaconess Medical Center (BIDMC), have identified a set of genetic elements never before known to be involved in cellular reprogramming.

According to John Rinn, a corresponding author of the study who is affiliated with HSCI, SCRB, the Broad, and BIDMC, “this is the first time that this new type of gene has been implicated in the reprogramming process. In reprogramming it’s important to find as many routes to reprogramming as possible. This finding gives us another set of fingers to play on the genomic piano that controls the ‘music’ of cellular reprogramming.”

“This is a group of RNAs that come from the dark region of the genome,” Rinn said. “We don’t know everything they do, but they clearly are involved in the reprogramming process.”

“We know reprogramming resets the genome [of the reprogrammed cell] globally,” said George Daley of HSCI and Children’s Hospital and, along with Rinn, one of the two senior authors of a paper published online by Nature Genetics. “What we’ve learned by working with John is that lincRNAs play essential roles in the reprogramming process. We’ve even identified one lincRNA that enhances reprogramming, which is tantalizing evidence that we can make reprogramming more efficient by harnessing lincRNAs.”

Added Daley, a biologist, “our groups came together to answer a question that neither group could answer alone.”

The new finding follows by less than two months the discovery by HSCI’s Derrick Rossi and colleagues that skin cells could be returned to an embryonic stem cell-like state using specially engineered synthetic mRNAs, eliminating the need to use viruses that can induce cancers to develop.

Rossi’s discovery turned the cell reprogramming field on its head, and was considered so significant that HSCI co-director Doug Melton announced that the HSCI iPS core, which produces reprogrammed cells for researchers, would immediately switch to using the method developed by Rossi.

The new findings by Rinn, Daley, and colleagues may help explain why Rossi’s method works — because RNAs appear to be part of the natural cell programming process — and may also be used to refine the Rossi reprogramming method, Rinn said. “What we think we’ve done is, [we’ve found] another way to throw the reprogramming switches,” Rinn said.

The road to this latest discovery began when Rinn first arrived at Harvard and the Broad in January 2009. He, Broad director Eric Lander, and Mitch Guttman, who are also authors on the Nature Genetics paper, discovered a group of 5,000 lincRNAs. “Then we worked with George (Daley) to figure out their relevance, if any, in reprogramming,” Rinn said.

Like much of scientific discovery, the latest finding was serendipitous. As Rinn explains it:

“We started out looking for something else: We wanted to know what happens when you program skin cells that originate in different parts of the body into stem cells. George and I were on a committee meeting together with a student who didn’t know the anatomic origin of the skin cells used to make stem cells. A light bulb went off that it may be interesting to make stem cells from skin cells originating all around the body and see if they ‘remember’ where they came from. Sabine Loewer, the lead author on the paper, immediately jumped at the idea as well — which was very brave for such a risky project.

“It turned out they didn’t matter where the cells came from,” Rinn said, “which is in itself an important finding. But in the process we found that hundreds of lincRNA genes were turned on and off during the reprogramming, so we focused on the ones that turned on, to see if they were part of the pluripotency process, and they were.”