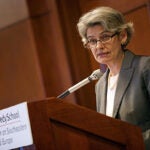 The rights of women

Tuesday’s elections ushered in significant changes in Washington, and with them several Harvard alumni who won seats in Congress.

“I must thank the voters of this great commonwealth for joining me in this movement to take our government back and for placing your faith in me to serve you in Washington,” Toomey said in his victory speech.

In Connecticut, Blumenthal, who served as Connecticut’s attorney general, vowed to make “people a priority.”

“Thank you for putting your trust, your confidence, and your support in me,” he said. “And thank you for letting me keep fighting for you.”

In addition, Alabama Democrat Terri Sewell, J.D. ’92, will join the House of Representatives, along with Kansas Republican Mike Pompeo, J.D. ’94. Nineteen other alumni were re-elected to House seats.

“Public service has been an integral part of the University’s mission since its founding in 1636,” said Christine Heenan, vice president for Harvard Public Affairs and Communications. “The participation of so many Harvard alumni in political races across the country is a testament to the significance of that mission and the way it resonates with the Harvard community long after they’ve left Cambridge.”

Harvard has a long tradition of producing notable political leaders. In addition to numerous members of Congress, cabinet secretaries, and governors, the University counts eight U.S. presidents among its alumni.