A program of exploration 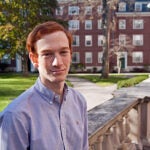 On an overcast Wednesday at Harvard Medical School, 15 first-year College students crowd around one of the world’s foremost neuroscientists and listen to the sound of brain cells firing.

“The demonstration was to show students that our eyes move, even when we’re looking at an object that’s fixed in space,” says David Hubel, John Enders University Professor of Neurobiology, Emeritus, winner of the 1981 Nobel Prize in medicine, and leader of a freshman seminar on the neurophysiology of visual perception. “The clicks they heard on my computer’s speakers were impulses from the brain of a monkey that was looking at a light line on a dark background. Every time the animal’s eyes moved, its brain cells fired. This is how we learn about the way the brain processes visual information.”

Hubel is one of dozens of senior faculty across the University who participate in the Freshman Seminar Program for the joy of working with students who are, in his words, “uncommitted, eager, and interested.” Founded in 1959, the program connects first-year students with leading faculty to explore topics of mutual interest. Class size is small to encourage discussion rather than lecturer. Courses are taught by faculty from almost all of Harvard’s schools.

Director Sandra Naddaff says that the program — which enrolled 1,307 freshmen in 129 seminars in 2009-2010 — is a “microcosm of liberal arts education at Harvard.”

“Students come to Harvard College not for preprofessional training, but for a liberal arts education,” she says. “The Freshman Seminar Program is an opportunity to explore a topic with a small group of your peers in the company of a member of the faculty. Students learn to participate in a discussion, to develop writing and oral presentation skills, and to cultivate certain behaviors of mind that stand them in good stead throughout their undergraduate careers.”

Last fall, Lillian Nottingham ’13 took “The Economist’s View of the World,” a seminar led by Professor N. Gregory Mankiw. As someone who studied economics in high school, Nottingham was thrilled to find herself in a small course with the chairman of the President’s Council of Economic Advisers during the second Bush administration.

“‘The Economist’s View of the World’ was, without a doubt, my favorite class my freshman year,” she says. “Not only was I in a class of less than 20 students in my first semester of college, I was able to study with a professor who was at the top of his field.”

Mankiw says that the aim of his course is to give students the tools to understand critical economic issues, particularly when opinion diverges among scholars.

“Students try to see the world through the eyes of prominent economists, such as Arthur Okun, Milton Friedman, Paul Krugman, and Friedrich Hayek,” he says. “We wrestle with the question of why these economists sometimes disagree, even while sharing the same academic discipline.”

Naddaff says that the Freshman Seminar Program also exists to encourage students to explore new and different topics. Students do not receive a letter grade, only a mark of satisfactory or unsatisfactory in order to encourage them to take subjects about which they might be curious, but know little.

“The program gives students the freedom to take intellectual risks,” she says. “That’s one of the most important things you can do as a first-year student.”

Few things feel riskier to young adults than performing in front of their peers, but that’s precisely what freshmen are asked to do in Remo Airaldi’s seminar, “The Art and Craft of Acting.” Airaldi, himself a graduate of the College and a 17-year member of the American Repertory Theater’s Resident Acting Company, says that last year he reserved half the slots in class for students with no acting experience.

“The whole point of the program is for people to take a leap of faith,” he says. “Maybe they’re interested in acting, but they’ve never done it. So, I took eight gung-ho students who had been acting since age 3 — theater camps, school shows, etc. — and eight who’d simply written something in their essay that touched me. It ended up being wonderful. There were moments when the people who hadn’t acted before were very truthful on stage, whereas the others had a lot of stuff that needed to be unlearned.”

If there’s one downside to the program, it’s that competition is fierce and not every student gets his or her first-choice seminar. Mankiw, for instance, says that he received 200 applications for 16 slots in his class this fall. Naddaff says that the Freshman Seminar Program has expanded dramatically over the past 15 years and that the College will continue to do all it can to meet demand. In the meantime, she encourages freshmen to apply to several seminars and to look at courses offered during the spring semester, when enrollment drops.

“A student may apply to as many seminars as they’d like,” she says. “We encourage them to apply to at least three and to remember that spring applications are much less intense and competitive.”

Students who participate in the program often develop close relationships with classmates and faculty that last throughout their Harvard careers.

“Dr. Hubel and I still keep in touch, and he encourages me in my pursuit of science as well as my interest in classical music, ballet, and arts journalism,” says Alyssa A. Botelho ’13. “I admire him not only as a scientist, but also as mentor and a friend. It is an honor to learn from him.”

Naddaff says that, once faculty members teach in the seminar program, many want to return year after year. That’s certainly the case for David Hubel, who considers himself lucky to have the opportunity to continue his research and teach small classes of first-year students.

“You’re the boss,” he says. “There’s no curriculum you have to fill. You don’t have to have a committee meeting if you want to introduce a new topic. On top of that, I would miss getting to know students if I were to stop doing this course. The freshman seminar is the best invention to come along in the half-century I’ve been around.”