A look inside: Adams House 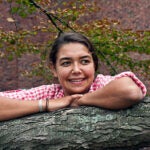 When one sentence just won’t do

For one evening, life is simply a drag

As Drag Night reaches full swing in the Adams House dining hall, female students dressed as “greasers” and male students dressed as “pink ladies” belt out the song “You’re the One That I Want” from the musical “Grease.” Amid a fortress of soda bottles and pizza boxes, the golden locks of Adams House co-Master Sean Palfrey bounce up and down as he rocks with laughter.

Judith Palfrey, also co-Master and dressed as the baseball player “Shoeless Joe,” explains the event’s origins: “The first Drag Night arose over 20 years ago in response to safety issues for gay and lesbian students at Harvard. It’s important to understand the differences and enjoy the diversity of people. That’s what Adams House stands for, particularly the strengths that each person brings to the community. Also, this is just pure fun and silly!”

Wearing a pink cashmere sweater, black wig, and chiffon skirt, Collin Rees ’12 said, “Drag Night reaches back to the roots of Adams House, back to when it was seen as the artsy House … It’s a chance to do something really fun with the Adams House community.”