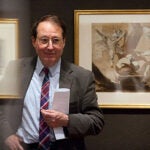 A focus on British art

An old Palestinian couple, uneasily at home in a Jordanian refugee camp, bicker and complain to an interviewer. An unlikely picture of war emerges in the 10-minute video, one of personal moments. The old man says of the aftermath of one battle, “For 60 days, a stone was my pillow.”

The video — rendered colorful and cartoonish with a technique called “rotoscoping” — is “Larvae Channel 2,” a 2009 production by young Egyptian artist Wael Shawky. It is one of a panoply of works — videos, photographs, animations, slide shows, games, and collages — in the latest exhibition at Harvard’s Carpenter Center for the Visual Arts: “The Image in Question: War – Media – Art,” on view through Dec. 23.

In one curtained alcove, the sounds of machine guns rip in Peggy Ahwesh’s “She Puppet, USA 2001,” an exploration of femininity in the age of video war games.

In “War Without Bodies 1991/1996,” a panel of nine photos by Allan Sekula, American civilians examine the nested barrels of an electronic mini-gun. In the center panel, a toddler reaches out with a happy squeal.

“The leading image [of war] is not the documentary any more,” said Berlin-based artist Antje Ehmann, who co-curated the Carpenter show with her partner, author and filmmaker Harun Farocki. She moderated an Oct. 21 panel with some of the artists, part of an opening celebration of the show. (An extended version will travel to Germany next year, and to Canada in 2013.)

Farocki agreed that artists today are finding new ways to capture the images of war. When the United States restaged a major Gulf War battle on video, he said, “The reign of the photographic and the cinematic images comes to an end.”

“It’s going backwards,” said Ezawa, a digital drawing and animation artist who lately has turned more to paper and wood.

There are cinematic images in the show, but they are strained through modernity, like Shawky’s old couple rendered as a cartoon. Or as in “Killed 2009,” a rapid-fire slide show of Depression-era images from the Library of Congress compiled by Los Angeles artist and filmmaker William E. Jones. Each image has a hole punched in the center — “killed” by a censor during a Farm Security Administration photo project.

At the same time, Jones’ work is a poignant look at the places that the “killed” of World War II came from —dusty streets, factories, and farms.

During the panel, Jones said he meant to evoke the violence of censorship, too. At the very least, Ehmann added, the images in “Killed” show that “war is present on very different levels.”

Certainly, the Carpenter Center exhibit shows war stripped of any cinematic glory. In a two-minute narrated video, “Je vous salue, Sarajevo” (1993), Jean-Luc Godard uses segments from a single photographic image — shardlike fragments that heighten the horror of a soldier rearing back to kick civilians lying on a sidewalk. Two other riflemen look away.

War also gets personal in four large-scale photographs by American-born artist and author Fazal Sheikh, taken from his 1997 book, “The Victor Weeps.” In each picture, a rough hand holds a single photograph of someone killed during fighting in Afghanistan. One man says of his dead brother, a mujahedin who fought the Soviets: “In my dreams, he sits beside a pool in a garden silently washing.”

War is personalized most directly in Lamia Joreige’s “Objects of War, Lebanon, 1999-2006,” a series of video testimonies by civilians who lived through fighting that began in 1975 and has been nearly continuous since.

During the panel, Joreige — the 38-year-old co-founder of the Beirut Art Center — wondered: “How do you represent such a dramatic experience?” Her answer was to offer time in front of the camera to survivors. Each had to bring an object to trigger a memory.

One man brought his worry beads. He recounted a comical tiff with his roommate during the 2006 Israeli invasion of Lebanon. “This little war between us made us forget there was a real war outside” — at least until the shelling got worse, the man said. “But as the situation slightly calmed down, we returned to cursing each other.”

A middle-aged woman showed three Walkmans to the camera. They saved the sanity of the young during heavy shelling 30 years ago. “I took refuge with the Walkman,” she said. “But then there were times music could no longer heal, because it gives an appetite for life.”