Those that serve, teach 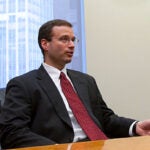 U.S. Secretary of Education Arne Duncan ’87 was honored with the Robert Coles “Call of Service” Lecture and Award at Harvard’s Memorial Church on Friday (Oct. 15) for his work in education reform.

In a talk that outlined his experiences with public service at Harvard and beyond, Duncan called the battle for quality education a social justice issue, and urged the audience to take up the fight.

“We need to make education our national mission. I invite you to a life of service that embraces that mission. Be a teacher. Tutor a child. Volunteer at a school. Transform the life chances of our nation’s young people.”

Prior to joining the Obama administration, Duncan was chief executive officer of the Chicago Public Schools, where he implemented a number of reforms, including expanding after-school and summer-learning programs, increasing access to early childhood education and higher education, and improving teacher quality.

The annual event is sponsored by the Phillips Brooks House Association (PBHA) and recognizes individuals who have made significant contributions to public service. Past honorees include Al Gore, former vice president and environmental activist, Marian Wright Edelman, president and founder of the Children’s Defense Fund, and Geoffrey Canada, last year’s recipient and founder of the Harlem Children’s Zone.

Inspired by the work of past honorees and by Coles, Duncan said another source of inspiration was his mother. He recalled that as a child growing up in Chicago, he took part in a free, after-school tutoring program organized by his mother for less fortunate children in the city’s South Side, first as a student and later as a tutor to other children.

Through that formative experience, “I internalized the belief that quality education can literally transform children’s’ lives.”

The event’s namesake, Robert Coles, professor emeritus of psychiatry and medical humanities at Harvard Medical School, looked on from the audience. For years, Coles, the recipient of many awards including the Pulitzer Prize and the Presidential Medal of Freedom, taught the popular course “The Literature of Social Reflection.” Duncan took the course in the 1980s as an undergraduate and said it “did something for my soul,” adding that one of his best Harvard memories involved working with a mentoring program through PBHA.

Evelynn M. Hammonds, dean of Harvard College and Barbara Gutmann Rosenkrantz Professor of the History of Science and of African and African American Studies, presented Duncan with the award. Massachusetts Gov. Deval Patrick ’78, J.D. ’82, introduced the secretary, saying he “brings a passion for what is possible for kids.”

Duncan listed several Obama administration efforts aimed at “providing every child a world-class education,” and told the crowd, “We must have the courage to do the right thing by children.”