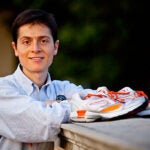 A small clinical trial of a potential targeted treatment drug has provided powerful evidence that it can halt or reverse the growth of lung tumors characterized by a specific genetic abnormality.

In their study published in the Oct. 28 New England Journal of Medicine, a multi-institutional research team reports that daily doses of the investigational drug crizotinib shrank the tumors of more than half of a group of patients whose tumors were driven by alterations in the anaplastic lymphoma kinase (ALK) gene.  In another one-third of study participants, crizotinib treatment suppressed tumor growth.  Preliminary results of the study were presented at the June meeting of the American Society of Clinical Oncology.

“Traditionally, Phase 1 trials have been used to determine the safety of drugs that have never been given to people before,” said Harvard Medical School instructor Eunice Kwak of the Massachusetts General Hospital (MGH) Cancer Center, corresponding author of the study.  “In this trial we were always looking for patients whose tumors might be more likely to respond to this drug, since we knew it inhibited the cancer-related proteins ALK and MET.  Fortunately, once the first stage of the trial had established the maximum tolerated dose, we had the flexibility to enroll additional patients whose tumors had these molecular abnormalities.”

In recent years, cancer researchers have found that genetic abnormalities — which spur uncontrolled cellular proliferation — underlie several types of cancer.  About 12 percent of cases of non-small-cell lung cancer (NSCLC), the leading cause of cancer death in the United States, are driven by mutations in a protein called EGFR, and several drugs that target the molecular pathway controlled by EGFR have halted or reversed tumor growth, at least temporarily.  In 2007 it was discovered that a rearrangement involving the ALK gene, already associated with several other types of cancer, was behind 2 to 7 percent of NSCLC cases.

Laboratory studies at MGH and other centers had shown that crizotinib could inhibit activity of both ALK and the MET oncogene, so the current study was designed in two parts. In the first stage, patients with any solid tumor that had not responded to standard therapies received increasing daily oral doses of crizotinib to establish the highest dose that would not cause intolerable side effects.  Two of the participants in that stage of the trial had ALK-altered NSCLC, and both showed what investigators characterized as “dramatic” symptom improvement.  Based on those results, the second stage was expanded from three to a total of seven sites to enroll additional NSCLC patients with ALK-rearranged tumors.

Of 82 patients with ALK-altered tumors who eventually enrolled in the trial, crizotinib treatment reduced tumor size in at least 47 and halted tumor growth in 27.  Among those participants, 63 have continued receiving the drug, some for more than two years.

“This therapy is allowing patients to function without pain or a constant cough,” Kwak said.  “The most rewarding thing about treating patients with this drug is watching them change from being completely controlled by their cancer to resuming a very normal life.”
While results of the study are promising, additional trials are required to confirm the effectiveness of crizotinib for NSCLC.  A Phase 3 clinical trial has started enrolling patients; more information is available by calling the MGH Cancer Center at 877.789.6100.

The fact that the Phase 3 trial started only three years after the Phase 1 trial began — a process that took a decade for the first EGFR inhibitor — reflects the power of prospective tumor genotyping, Kwak said.

“The MGH already had the infrastructure in place to screen tumors for molecular abnormalities, so we were poised to test for ALK rearrangement,” she said.  “We were actually able to identify the first patient with such a lung cancer and enroll him in the initial stage of this study four months after the original report of ALK-altered NSCLC was published.  Then it was amazing to see his symptoms improve within a matter of weeks.  These results are just one more compelling example of what we can do for our patients if we just learn more about their tumors.”

The study was supported by Pfizer, which is developing crizotinib for clinical application, and by grants from the Aid for Cancer Research Foundation, the National Cancer Institute, the American Society of Clinical Oncology, and other funders.