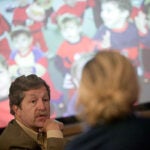 More than half of the world’s 6 billion people now live in cities, those complex hives of activity that require intensive energy and complex governance. By 2050, that proportion is expected to rise to two-thirds of the world’s population. So it makes increasing sense to strive toward a sustainable model of urban life.

The Working Group on Sustainable Cities at Harvard University, a nascent cluster of experts from the University’s design, business, health, and government communities, is working toward that end, and is ready to welcome voices from every discipline. Attending the group’s eighth private meeting last month (Sept. 14) were an authority on climate change, a public health scholar, a city planner, an architect, a political scientist, and even a professor of divinity.

The group is meant to “focus our brain trust so we can immediately help,” said its originator, landscape architect Martha Schwartz, adding that Europe is already 30 to 40 years ahead of the United States in its thinking about sustainable cities. Cities are the fulcrum of the economy and the heart of culture, she said. “In order for the United States to go forward, we have to rethink our cities.”

Schwartz is a professor in practice in the Department of Landscape Architecture at Harvard’s Graduate School of Design and a self-described student of “the public realm.” She is co-teaching a “Generative Ecologies” studio course this semester, the second in a row to use Edessa, Greece, as a model for sustainable development.

But she is eager to take the issue beyond the classroom too. Schwartz envisions a final working group of both scholars and practitioners — a synergy of expertise.

Last month, she and a dozen core members of the still-growing group vetted the idea of starting with a series of private working sessions with U.S. mayors, followed perhaps by a public conference.

“The idea is to be of most use,” said Schwartz. “The mayors are a good focus group (and) are resource hungry.” She compared the planned mayoral sessions to charrettes, intense sessions of collaborative work that are common among designers.

The group’s first event was a working luncheon with two Boston-area mayors, hosted on Sept. 30 by the Institute of Politics (IOP) at the Harvard Kennedy School. In attendance was the former mayor of Detroit, Dennis Archer, who is an IOP Fellow this semester.

He also stopped by the working group’s Sept. 14 meeting, and liked the idea of Harvard convening small groups of mayors to discuss sustainability. The need for problem solving has intensified in the depressed economic climate, said Archer. “What you’re creating here is something exceedingly invaluable.”

Climate scientist Dan Schrag has offered the working group a temporary home at the Harvard University Center for the Environment, where he is director. But he was skeptical of meeting with mayors and preferred to use the University’s immense “convening power” to look at urban sustainability from another angle: healthy cities, for instance.

“Jack could go to town,” said Schrag, gesturing across the table at John D. “Jack” Spengler, the Akira Yamaguchi Professor of Environmental Health and Human Habitation at the Harvard School of Public Health.

One way or another, said Spengler, investigating the intersection of sustainability and cities makes sense, as long as those investigations add up to “new systems of thinking” about the urban environment.

There is urgency to the issue because of climate change, which will hit cities hardest, he said. “Buildings are getting wet that never got wet before, and people die indoors from heat waves.”

The ultimate focus of the working group remains under discussion, said Schwartz, but this year will be devoted to “researching issues that mayors have. … We’re on a fact-finding mission.”

To keep those facts in order, the working group is using a Surdna Foundation grant to design a web-based “knowledge platform,” and will also be getting information technology help from the Harvard Office for Sustainability. “It’s clear to the mayors this could be a resource,” said Schwartz. “We’re trying to energize mayors, and to learn from them.”

Schrag was also skeptical of the website. “That’s not how interdisciplinary research happens,” he said.

The eighth meeting revealed a nascent entity in search of permanent leadership, funding, an institutional home, and an organizational model.

Perhaps an executive education model is best, said working group member David Luberoff, executive director of the Rappaport Institute for Greater Boston, or perhaps an “executive session” model in which participants keep coming back to talk.

Spengler agreed, and said of cities: “We need them as our laboratories, and they need us for our resources.”

Schwartz was grateful for the lively meeting because it showed how much had to be done. “This is a start-up,” she said of the group. “This is an idea.”

Yes, Cox agreed, but it’s an idea that needs to go somewhere, and Harvard can help. “We live in a country where cities are pretty desperate,” he said. “What I keep thinking about is: To whom much is given, much is expected.”