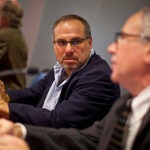 Shing-Tung Yau sees a beautiful universe around him, crafted by nature into the shapes and forms we see every day. Mathematics describes those shapes and forms, the discipline of geometry in particular. So, to Yau, it shares nature’s beauty.

Yau, the Graustein Professor of Mathematics and chair of the Math Department, is trying to bring math out of the closet. Its practitioners, he said, are not strange or reclusive, as the public sometimes perceives them, but rather scientists trying to understand the orderly principles that describe the world around us.

Isaac Newton, for example, made major contributions to calculus in order to describe the motions of the planets. Mathematicians draw insights from their work with numbers, shapes, and forms that can help other scientists, especially physicists, in their work.

“I think people don’t understand that we are scientists and make fundamental contributions,” Yau said. “We can help physicists; we can help engineers.”

Yau’s own work is an important example of such fruitful collaboration. In 1976, Yau proved the Calabi conjecture, which dealt with the properties of multidimensional shapes called manifolds. Yau’s work proved important to physicists who use string theory to describe the universe. String theory says that the basic particles that we understand to constitute matter are themselves made of tiny vibrating strings.

One of string theory’s difficulties is that it requires a universe made of 10 dimensions. That would mean the four dimensions of space-time that we live in — length, width, height, and duration in time — are only part of the puzzle. It turns out that a six-dimensional Calabi-Yau manifold resulting from Yau’s work fits string theory nicely, providing a shape for these six dimensions. So critical is the geometry of the manifolds to the universe that their shapes determine the basic forces and particles of matter.

“In principle, you can use the geometry of space-time to describe the fundamental structure of particles,” Yau said. “We have been able to get a lot of important ideas when it comes to string theory. It’s been a very fruitful collaboration.”

Yau teamed up with science writer Steve Nadis to tell the story of the discovery of Calabi-Yau manifolds in a book that came out in September. “The Shape of Inner Space: String Theory and the Geometry of the Universe’s Hidden Dimensions” details his work proving the Calabi conjecture, which he actually first labored to disprove, realizing only in his failure that the conjecture was probably right after all. The book goes on to discuss string theory and the developments that stem from his proof.

“I couldn’t produce an answer [that proved the Calabi conjecture wrong], so eventually I had to believe the opposite is true,” Yau said.

Yau jokes in the book’s preface that the phrase “Calabi-Yau” has been used so often in recent years that he almost feels that “Calabi” is his first name, which he says he’d be proud to have. Yau also said that his study of mathematics has been an adventure and that the math theories underlying models of the universe hold an undeniable beauty. Yau’s work has earned him numerous prestigious awards, including the Fields Medal, the National Medal of Science, and a MacArthur Foundation fellowship, known as the “genius grant.”

Looking ahead, Yau said the new frontiers of mathematics will involve “quantum geometry,” which explains both quantum mechanics and general relativity.

“Quantum geometry — nobody knows what it is. Nobody has a clue. That’s why it’s exciting,” Yau said. “It’s too difficult a subject for one person or one discipline to work on.”