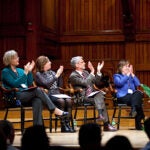 Harvard University has received a gift of $12.3 million (10 million euros) from Lily Safra. Given in memory of her late husband, Edmond J. Safra, founder of the Republic National Bank of New York and prominent philanthropist, the gift will support the activities of the Edmond J. Safra Center for Ethics, permanently endow the graduate fellowship program, and fund the recently launched Research Lab. This personal gift from Mrs. Safra follows a donation of $10 million from the Edmond J. Safra Foundation to endow the center in 2004.

“We are grateful for this timely gift to the Edmond J. Safra Center for Ethics,” said Harvard President Drew Faust. “At a moment in history when many people are examining the global financial system and the role of public institutions, we will all benefit from serious research into the increasing complexity of public life and the ethical issues faced by corporate leaders.”

“This gift will allow the center to build upon its remarkable success and continue to shape dialogue on critical ethical issues across the University and beyond,” added Harvard Provost Steven E. Hyman.

Mrs. Safra said, “I have always considered it a wonderful privilege to be able to count myself among the Edmond J. Safra Center’s friends and supporters, and I am delighted to offer this additional support for the center’s vitally important work. If we truly value justice and basic human dignity, ethical questions need to be part of every field of study and every policy discussion. I know my husband would share my great pride in the Edmond J. Safra Center’s tremendous contributions toward this goal — and its promise for the future.”

In addition to a $10 million gift from the Edmond J. Safra Philanthropic Foundation in 2004, other previous gifts facilitated by Mrs. Safra helped endow the Edmond J. Safra Graduate Fellowships in Ethics and a Faculty Fellowship in Ethics. A portion of the new funding will fully endow the Edmond J. Safra Graduate Fellowship program and ensure that the Edmond J. Safra Center for Ethics’ role in training younger scholars and developing future leaders in ethics will continue. Since its founding over 20 years ago, the center’s fellowship programs have hosted more than 250 talented scholars, some of whom have gone on to establish ethics centers at other universities in the United States and abroad. A sampling of this year’s fellowship topics includes projects examining financial ties between the pharmaceutical industry and psychiatric treatment boards, determining which psychological factors predict whether whistleblowers will be praised or rejected, and understanding the interaction of policy and daily attitudes toward risk in the financial industry.

Edmond J. Safra Center for Ethics Director and Harvard Law School Professor Lawrence Lessig, who succeeded founding director Dennis F. Thompson as the center’s director in 2009, launched a new Research Lab as a major initiative designed to address fundamental problems of ethics in a way that provides benefit to institutions of government and society around the world. The lab’s first project focuses on the problem of institutional corruption.

“We are enormously fortunate to have this extraordinary gift from Lily Safra,” said Lessig. “The support of the Edmond J. Safra Philanthropic Foundation has already secured a permanent place for the Center for Ethics at Harvard. This gift will allow us to extend our work to important and timely questions of institutional corruption.”

Mrs. Safra, a longtime member of the center’s advisory council, has participated regularly in the center’s seminar and public programs. She is known for her philanthropy, patronage of the arts, and longtime support for educational, scientific, medical, and humanitarian organizations around the world.

Founded in 1986 by former President Derek Bok, and led for more than 20 years by Professor Dennis Thompson, the center encourages teaching and research about ethical issues in public and professional life. It is the core of a well-established movement at Harvard to give ethics a prominent place in the curriculum and on the agenda of research. By promoting a perspective informed by both theory and practice, the center helps to meet the growing need for teachers, scholars, and leaders who address questions of moral choice in the professions and public life more generally.

Mrs. Lily Safra shared her commitment to caring for the less fortunate with her husband, Edmond J. Safra, one of the 20th century’s most accomplished bankers and founder of the Edmond J. Safra Philanthropic Foundation. Since 2000, she has chaired this foundation, which supports hundreds of projects related to education, science and medicine, religion, culture, and humanitarian relief in over 50 countries.

In addition to funding neuroscience professorships and research positions at dozens of universities and institutes around the world, Mrs. Safra has initiated and supported many educational projects, including endowing the Edmond J. Safra Center for Ethics at Harvard University. A long and distinguished relationship with the Hebrew University of Jerusalem led to the naming of the Edmond J. Safra Campus, where the $130 million Edmond and Lily Safra Center for Brain Sciences is located. In an impoverished area of northern Brazil, she founded the Alfredo J. Monteverde School, which teaches science and technology to 1,000 children. Recently, she helped to establish the Institut Pedagogique Edmond J. Safra at the Mémorial de la Shoah in Paris. Mrs. Safra is honorary chairman of the International Sephardic Education Foundation (ISEF), which she established with her husband in 1977. ISEF is the largest nonprofit organization promoting higher education for gifted Israelis from disadvantaged backgrounds. In recognition of her work, Mrs. Safra has been awarded honorary doctorates from a number of universities, and she was made commandeur of the Ordre des Arts et Letters and chevalier de la Légion d’Honneur.