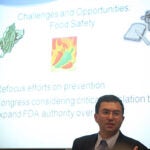 Be skinny, be strong, be loved — be fooled

A molecular switch may make it possible

Harvard researchers’ discovery of a molecular switch that turns off the natural process of skin pigmentation may lead to a novel way of protecting the skin — activating the tanning process without exposure to cancer-causing UV radiation. In their report in the journal Genes & Development, researchers at the Massachusetts General Hospital (MGH) Cutaneous Biology Research Center (CBRC) describe how blocking the action of the switch — an enzyme called PDE-4D3 — in the skin of mice led to a significant increase in melanin production.

The study was led by David Fisher, Wigglesworth Professor of Dermatology at Harvard Medical School, director of the MGH Department of Dermatology, and an investigator at the CBRC.

“The primary goal of inducing melanin production in human skin would be prevention of skin cancer, since all the common forms are known to be associated with UV exposure,” he said. “Not only would increased melanin directly block UV radiation, but an alternative way to activate the tanning response could help dissuade people from sun tanning or indoor tanning, both of which are known to raise skin cancer risk.”

In 2006 Fisher’s group showed that the metabolic pathway leading to UV-induced pigmentation is controlled by cyclic AMP (cAMP), a molecule known to regulate many important cellular processes by carrying messages from the cell surface to internal target molecules. Using a strain of transgenic mice with red hair and melanocytes in their skin — common mice have none of these melanin-producing cells in the outer skin layer — the group found that inducing cAMP production in the animals’ skin led to significant pigmentation. But since the drug used in that study cannot penetrate human skin, the researchers needed to investigate an alternative approach.

Because most drugs act by blocking rather than stimulating their target molecules, better defining the pathway leading from UV exposure to melanin production could identify a step limiting melanin expression that, if suppressed, would increase production of the pigment. The strength and duration of the signals carried by cAMP are controlled by PDE enzymes, which break down the molecule after its message is delivered. Detailed analysis of the melanin expression pathway identified PDE-4D3 as the regulator of cAMP activity in melanocytes. The transcription factor activated by cAMP induces production of both melanin and PDE-4D3, and the enzyme in turn modulates the pigmentation process by breaking down cAMP.

The researchers confirmed the role of PDE-4D3 in controlling melanin expression by applying several agents that block PDE production to the skin of the transgenic mice with epidermal melanocytes. After five days of treatment, the animals’ skin had darkened significantly, while treatment of control mice with no epidermal melanocytes produced no effect.

“Although PDE enzymes degrade cAMP within all cells, different members of this enzyme family are active in different types of cells,” Fisher said. “We showed that PDE-4D3 is particularly important within melanocytes, and while the enzyme may have a role in other cells, a blocking drug that is applied directly to the skin would probably have limited effects in other tissues.” Additional research is needed to identify drugs that penetrate human skin and safely block PDE-4D3, he said. His team has already starting searching for such agents.

Co-authors of the Genes & Development study are lead author Mehdi Khaled and Carmit Levy, both of the MGH CBRC. The study was supported by grants from the National Institutes of Health, the Melanoma Research Alliance, the U.S.-Israel Binational Science Foundation, the Adelson Medical Research Foundation, and the Doris Duke Charitable Foundation.