Reading the Quran in Germany 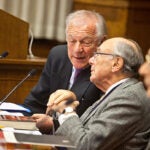 German scholar Stefan Wild on Tuesday (Oct. 26) delivered the first of his three H.A.R. Gibb Arabic and Islamic Studies Lectures, a series sponsored by Harvard’s Center for Middle Eastern Studies. The talk —“The History of the Quran: Why Is There No State of the Art?”— drew a large and avid audience to Tsai Auditorium.

Wild was for 25 years professor for Semitic languages and Islamic studies at the University of Bonn, where he remains a professor emeritus, and is co-editor of the International Journal for the Study of Modern Islam. He began the evening — after noting that “the only way we can tackle a topic as vast and complicated as the Quran is by insisting on subjectivity” — with a discussion of the history of Quranic studies in Germany and the religious text’s role in politics there, saying that though Islamic studies were only a small part of academia in his native land, they reflect the history of the intelligentsia.

He first recounted an episode from the late 1930s, when Nazi officials commissioned a translation of Hitler’s “Mein Kampf” into Arabic. Authorities asked the translator to give the book a “Quranic tone,” interspersing Hitler’s text with entries from the holy book to lead Muslims to begin to equate Hitler with the prophet Muhammed. The second incident Wild mentioned was the tension between East and West Germany during the Cold War and the anti-religious and anti-Islamic tone in the Communist nation.

“At the height of the purges it became dangerous to even discuss the text,” Wild said, adding that “after 1949 Stalinism became tamer toward Islam. The Soviet Union wanted to show its Muslims were well-treated.”

This softening of attitude, however, did nothing to advance Islamic studies, which were by then “in a state of disarray” in Germany. “There was no free access to relevant archival materials, no consensus, a significant amount of distrust among scholars, and no training among students in the Quran,” said Wild. For many years, only one translation of the text was available.

Things have changed. “There are so many exciting and interesting trends in contemporary Quranic scholarship,” said Wild, though problems remain, including that two of the 26 letters of the Arabic alphabet still await adequate lexicographic treatment. “The avalanche of studies that claim to have the black box” to unlocking the Quran for modern scholars, Wild said, simply do not.

One of the main topics is the cultural context in which the Quran was written. How much of the book was borrowed from Judaism? Which events can be linked to known history, either in Mecca or Medina or even, as some suggest, Mesopotamia? Was the prophet really named Muhammed? Was his legacy enriched or even invented by later writers?

“These clusters of disagreements don’t show any sign of being solved soon,” Wild said, noting that they have, however, rejuvenated Quranic studies, which is why it is “truly important at the moment to establish a state of the art” in the field.