On God and evolution 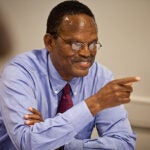 Learning the streets, scene by scene

Friendship — and differences — between Darwin and Asa Gray examined

Theater is not typically associated with naturalist Charles Darwin, or science at all, for that matter.

Janet Browne, Aramont Professor of the History of Science and chair of the Department of the History of Science, was instrumental in putting together the bicentennial, and in bringing the Cambridge, England-based Menagerie Theatre Company to perform “Re: Design,” a dramatization of the correspondence between Darwin and Gray that was written by Craig Baxter.

Browne, who introduced the production, called on the audience to think “back into the 19th century,” which was not difficult, given that many of the stage props were historically accurate artifacts taken from the museum’s holdings. The stage was outfitted with a desk where Darwin and Gray both sat, at various points in the play. There was also a coat rack; a draped side table where Darwin pondered, drank tea, and wrote to Gray; and another small desk belonging to Gray that housed an inkwell and scattered letters from Darwin.

Gray, played by Patrick Morris, was born on Nov. 18, 1810. He forsook his profession as a physician to become a botanist, and was appointed a professor of natural history at Harvard in 1842, the same year he became head of the School’s Botanic Garden. Harvard had no herbarium, no botanic library — only a small greenhouse and garden. Portions of Gray’s salary went toward cultivating a library and herbarium, both so extensive that they would eventually take over his house.

Gray offered his collections to Harvard with the stipulation that a suitable building be erected to house them. Today they can be found inside Harvard’s Gray Herbarium.

A devout Christian, Gray’s struggle between the concept of design by a higher power and Darwin’s theory of natural selection are well-documented in his letters to Darwin, which were the primary source in developing the play, with direct quotes culled from the duo’s elaborate correspondence.

The pair met at the Royal Botanic Gardens, Kew, in England. The play picks up shortly after their introduction, with Darwin, played with lumbering and breathless intelligence by Terry Molloy, soliciting Gray’s knowledge on a variety of flowers — knowledge that would further Darwin’s theory of natural selection.

The letters propel Gray and Darwin through the years, shining light on their various achievements, the publication of Darwin’s “On the Origin of Species,” to a reuniting in England in 1868. Though he fundamentally disagreed with Darwin’s assertion of natural selection, Gray staunchly defended Darwin, advocating that a combination of evolution and theism could allot for his combustive theory.

“I advise nobody to accept Mr. Darwin’s theory as true. Time has not come for that, perhaps never will. I also advise against a similar credulity on the other side, and blind faith that species have no secondary cause,” Gray wrote in an 1860 article for the Atlantic Monthly.

The play’s script, largely built from letters, is also informed by articles and book excerpts, and was commissioned by the Darwin Correspondence Project.

In the preface to his book “Darwiniana,” Gray wrote: “[I remain] one who is scientifically, and in his own fashion, a Darwinian, [and] philosophically a convinced theist.”

“Natural selection is not the wind which propels the vessel, but the rudder which, by friction, now on this side and now on that, shapes the course,” he continued. “Variation answers to the wind.”

The Asa Gray Bicentennial rolls on through the month of November. For more events and information.