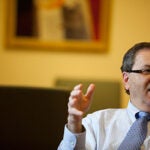 A new Center for Primary Care

Harvard Medical School (HMS) and Ecole Polytechnique Fédérale de Lausanne (EPFL) in Switzerland have established a joint research and education program thanks to a contribution from the Bertarelli Foundation. The Bertarelli Program in Translational Neuroscience and Neuroengineering is a collaborative exchange aimed at improving quality of life for people with neurological disabilities.

The initial $9 million donation also includes an endowment of the Bertarelli Professorship in Translational Medical Science. The inaugural incumbent will be William Chin, currently executive dean for research at Harvard Medical School. Chin will oversee the development of the new joint program, which creates a pathway from device design at EPFL to clinical testing at HMS and builds a bidirectional exchange for students and researchers from the two institutions.

Flier applauded this new partnership: “Thanks to the Bertarelli family’s tremendous generosity and vision, we will be exploring an area of cutting-edge science that will lead to exciting discoveries, particularly in the field of neurotechnology, for both our institutions. I look forward to working with the Bertarelli Foundation and our Swiss partners in this new venture.”

EPFL and HMS already collaborate on translational neurobiological research, notably on the visualization and simulation of the brain, headed by the EPFL Signal Processing Laboratory. In collaboration with Massachusetts General Hospital, Harvard and EPFL have recently published results in a joint paper in PNAS about the structure of the brain in children between 2 and 18 years of age.

“This is a great scientific opportunity to translate our bioengineering advances in neuroprosthetics into clinical studies,” said Aebischer.

Bertarelli, who is a Swiss entrepreneur and philanthropist and two-time winner of America’s Cup with his team Alinghi, has already funded significant research in translational neurosciences at EPFL’s Neuroprosthetics Center within the Institute of Bioengineering. There, research in cortical and spinal implants is envisioned, while noninvasive man-machine interfaces and neural coding devices to aid in movement and machine control are already under way. EPFL scientists also hope to explore optogenetics — the use of light as a biological switch for gene expression — to create second-generation implants for the hearing-impaired.

To further future collaboration, a Bertarelli Grant program will be established in 2011 for research projects at the forefront of neuroscience and neuroengineering by students and scientists from the two faculties. Results from novel coursework and research will be shared at a joint symposium to be held annually in Boston and Lausanne, alternatively.

“Since studying at Harvard, I have remained involved with the School and I also have close ties with EPFL,” said Bertarelli. “I thought it would be an interesting idea to bring both faculties together to join forces in common projects, where each entity could contribute with its own core competences, the neuroengineering developments for EPFL and the experience in medical application to patients for HMS. This project once again shows that Europe and America can collaborate to have a very competitive impact in the advancement of science,” he added.