Microbes to the rescue 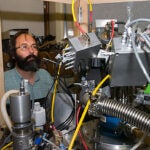 Microbes living at the bottom of the Gulf of Mexico may consume far more of the gaseous waste from the Deepwater Horizon oil spill than previously thought, according to research carried out within 100 miles of the spill site.

A paper on that research, conducted before the Deepwater Horizon rig exploded six months ago, will appear in a forthcoming issue of the journal Deep-Sea Research II. It describes the anaerobic oxidation of methane, a key component of the gulf spill, by microbes living in seafloor brine pools.

“Because of the ample oil and gas reserves under the Gulf of Mexico, slow seepage is a natural part of the ecosystem,” says Peter R. Girguis, John L. Loeb Associate Professor of the Natural Sciences at Harvard University. “Entire communities have arisen on the seafloor that depend on these seeps. Our analysis shows that within these communities, some microbes consume methane 10 to 100 times faster than we’ve previously realized.”

Girguis is quick to note that methane is just part of what spilled from the ruptured Deepwater Horizon well for three months, and that the rate at which methane spewed from the damaged well far exceeds the flow that microbes would ordinarily encounter in the gulf.

Key to the work by Girguis, Harvard research scientist Scott D. Wankel, and colleagues of both scientists was the ability to use on-site mass spectrometry to obtain accurate measurements of seafloor methane. It has been difficult to take such measurements because most tools don’t work accurately 5,000 to 7,000 feet below the sea’s surface, where pressures are intense.

Using this new technique, the scientists were able to ascertain methane concentrations in brine pools surrounding gas seeps, as well as in the water column above the pools. Combining this data with measurements of microbial activity, they were able to extrapolate just how quickly the microbes were consuming the methane.

“In fact, we observed oxidation of methane by these microbes at the highest rates ever recorded in seawater,” Girguis said.

Methane is a greenhouse gas, up to 60 times more potent than carbon dioxide. Gigatons of the volatile gas are produced in seafloor sediments, above and beyond that generated by gas seeps that pockmark the floor of the gulf and other bodies of water. But, Girguis said, somewhere between the seafloor and the sea’s surface, much of the methane vanishes.

A study published in the journal Science in August detailed a bacterial species reportedly able to degrade oil anaerobically in the gulf. But a subsequent paper in the journal contended that these microbes mainly digested gases such as methane, propane, ethane, and butane, not oil. The “Deep-Sea Research II” paper adds to scientists’ growing understanding of these species’ ability to degrade the byproducts of the Deepwater Horizon spill.

Girguis and Wankel’s co-authors are Samantha B. Joye and Vladimir A. Samarkin of the University of Georgia, Sunita R. Shah of the U.S. Naval Research Laboratory, Gernot Friederich of the Monterey Bay Aquarium Research Institute, and John Melas-Kyriazi of Stanford University. Their work was funded by the U.S. Department of the Interior’s Minerals Management Service, the National Oceanic and Atmospheric Administration, the David and Lucile Packard Foundation, Harvard, and the National Science Foundation.