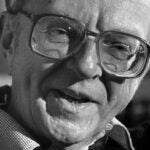 James S. Duesenberry, William Joseph Maier Professor of Money and Banking, Emeritus, and a member of the Harvard Economics Department for more than half a century, died on October 5, 2009.  We miss him.  Jim’s spirit of curious but skeptical intellectual inquiry, of willingness to pitch in when work needed to be done, and of concern for making both Harvard University and the world at large a better place – all with wit and humor, and a wealth of engaging stories that he loved to tell – influenced for the better this university and many of the people who comprise it.

A native of West Virginia, Jim Duesenberry studied economics at the University of Michigan and came to Harvard in 1946 with his wartime military service in the Pacific behind him and his Ph.D. dissertation already well along.  The resulting book, Income, Saving, and the Theory of Consumer Behavior, published in 1949, immediately catapulted him into the economics profession’s front rank of leading young scholars.  Jim argued that in deciding how much to spend or save, people looked not just to their current incomes but to benchmarks like what they had spent in the past, or what they saw others spending.  The “relative income hypothesis,” as the idea became known, attracted enormous attention.  To Jim’s amusement, in recent years it has enjoyed a significant revival of interest among economists, often younger people who had no idea that Jim was still living and still active professionally.  (A 2005 article in the New York Times pointing to this anomaly was headlined “The Mysterious Disappearance of James Duesenberry.”)  Today the relative income hypothesis is a key underpinning of several important strands of economic theorizing.  Indeed, Jim could well be considered the founder of the rapidly growing field now called “behavioral economics.”

In the 1950s and 1960s Jim devoted much of his professional energy to trying to understand why the economy fluctuates, and what economic policy can do to ameliorate the downturns and moderate the excesses.  His 1958 book Business Cycles and Economic Growth examined these problems from a viewpoint that took careful account of the institutional setting in which individuals, business executives and government policymakers interact, and the resulting constraints on their actions.  (What he had to say about the role of “easy credit” in triggering “speculative booms” reads well today as a description of the makings of the 2008-2009 crisis in the U.S.)  From then on, Jim’s real interest in economics was in how economic policy, especially monetary and fiscal policy, can help mitigate economic downturns and curb excesses.

While Jim was always fascinated by difficult-to-explain facts or clever analytical insights, what mattered to him was using the tools of economic policy to make the world better for ordinary citizens.  It seemed only natural that he played an active role in public policymaking as well.  During 1966-1968 he served on the Council of Economic Advisers in Washington, and after his return to Harvard he served as chairman of the board of directors of the Federal Reserve Bank of Boston, chairman of the presidential commission on mortgage lending, chairman of the Massachusetts savings banks’ insurance trust, and in many other similar positions besides.  But while Jim took the issues and the work seriously, he never took himself seriously.  He often joked that what really scared him was that the people in charge were looking to him for answers.

The third phase of Jim’s work in economics grew out of his increasing sense that financial markets and financial institutions matter importantly for how economic policies work and why the economy behaves as it does.  Beginning in the 1970s, Jim, mostly in collaboration with Barry Bosworth, explored the relationships between production, employment, incomes, and profits on one side and, on the other, borrowing, lending, and investing.  Part of the motivation was his sense that most business downturns, in economies like the United States, are triggered by events in the financial markets.  (As the most recent episode sharply reminded us, they still are.)

Finally, beginning in the mid 1980s Jim devoted an increasing share of his attention to the challenges of economic development.  During the latter years when he was still teaching, and even more so once he retired in 1989, he enjoyed traveling to lower-income countries to talk with policymakers, academics, bankers, and anybody else interested in the role that a developing country’s financial markets play in whether it actually develops or not.  At that time, bringing modern monetary economics to bear on the practical problems of economic development provided a fresh and important perspective.  Jim was among the earliest Americans to teach Western economics in China, once doing so was permitted again following the Deng Xiaoping reforms, spending a month lecturing at Southwestern University of Finance and Economics in Chengdu (the capital of Sichuan province) in 1985.  A younger member of the department who lectured there twenty years later was welcomed as a colleague of Professor Duesenberry’s and was regaled with stories of his visit.

Jim’s service to Harvard and the broader community ran well beyond the narrowly academic.  He chaired the Harvard Economics Department from 1972 to 1977, a difficult period when the department grappled with intellectual divisions stemming from the political strains of the time.  Jim also served for more than two decades as a town meeting member in Belmont – a position for which he at first campaigned door-to-door – representing Precinct 1, historically Belmont’s most liberal district.  For ten of these years he was a member of the town’s Warrant Committee (the finance committee).  He was also an active member of Belmont’s Unitarian Universalist church, shouldering his share and more of the day-to-day work that any such institution requires – so much so that Reverend Carpenter, after Jim’s death, referred to him as that rarest of creatures: a man who enjoys committee work.

But throughout, Jim never lost his interest in the central focus of his work in economics: the ongoing challenges facing monetary and fiscal policy.  Among his Harvard colleagues, he was always eager to discuss whatever was the most problematic issue of the day.  Until the very end of his life, he participated regularly in meetings of the economic advisory panel of the Federal Reserve Bank of Boston.  In time he became the oldest active member of the Brookings Panel on Economic Activity.  His persistent approach was that understanding the current situation was of course necessary, but what really mattered was having something to say about what should therefore be done.

At Harvard Jim was also a teacher.  It was in small-group classes and seminars that he stood out, giving the discussion an intensity one would not have expected from his mild manner in ordinary conversation.  But with his dry, sometimes mordant, English-style wit, that intensity was never overbearing.  He was as likely to quote Gilbert and Sullivan or A. A. Milne, as any economist.  He especially delighted in stories, and whenever possible he would use one to make his point.  Jim was also highly effective as a one-on-one adviser.  His analytical insight was acute, and his judgment was consistently sound.  In addition to his students at Harvard, he attracted followers wherever he traveled.  His several visits to Japan, for example, created a close relationship between the economics departments at Harvard and Kobe Universities that continues to this day.  Economics departments around the world, as well as central banks, finance ministries, and financial regulatory bodies, are filled with his students and advisees.

And Jim was devoted – completely devoted – to his wife Margaret, a violinist and music teacher, and their four children.  Attending Marg’s concerts, often helping to hand out the printed programs, was a major part of his life.  So was reading to his children.  Marg died nearly two years before Jim, not long before what was to have been their 60th wedding anniversary.  Their son Keith predeceased both of them.  Their son John and daughters Holly and Peggy, along with four grandchildren, survive him.