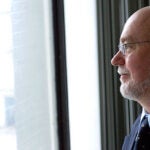 The Trustees of Reservations recognized David R. Foster with its prestigious Charles Eliot Award at the organization’s annual meeting and dinner held on Sept. 25.

Foster was honored for his 25 years of inspiration and visionary commitment to the trustees and greater Massachusetts conservation community. He is the director of Harvard Forest and a faculty member of the Department of Organismic and Evolutionary Biology at Harvard University.

One of Foster’s most notable contributions to the conservation community has been his leadership of a remarkable team of university experts in an outreach campaign designed to promote the conservation of forests in the Massachusetts and New England landscape. His team, largely drawn from the Harvard Forest — an ecological research area located on 3,000 acres in Petersham, Mass., that is owned and managed by Harvard University — and New England universities, published “Wildlands and Woodlands: A Vision for the Forests of Massachusetts” in 2005 followed by its sequel this year, “Wildlands and Woodlands: A Vision for the New England Landscape,” which emphasizes forest and farmland conservation.  These publications have raised consciousness among policymakers and the public at large, stimulating grassroots activism. The earlier publication has already contributed to important, ecologically informed changes in forest policy in Massachusetts.