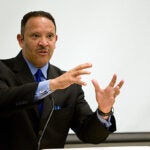 In life, David L. Halberstam ’55 cherished his days as a student writer for The Harvard Crimson, a gig that jump-started his legendary career as an investigative journalist whose efforts eventually won the Pulitzer Prize. Now, the late Halberstam has been memorialized near his former Plympton Street stomping grounds with the unveiling of the new Halberstam Square at the intersection of Linden, Bow, and Mount Auburn streets.

Rain deterred the Oct. 6 outdoor festivity, which would have involved installing the official Halberstam Square plaque. Instead, Cambridge Mayor David P. Maher hosted the public dedication inside The Harvard Crimson, where alumni, city councilors, and Halberstam’s many admirers packed the house.

At Harvard, Halberstam was a sports editor and managing editor of The Crimson. Though he was a history concentrator, “David majored in the Crimson … it was his life,” said classmate Stanley Katz ’55, Ph.D. ’61.

Halberstam’s daughter Julia said that, faced with a lack of an engagement ring, her father proposed to her mother instead with his Crimson medal. “The Crimson was where he learned to take the kind of risks that shaped the rest of his career,” she said.

After leaving Harvard, Halberstam took a post at the Daily Times Leader in West Point, Miss., where, said Katz, Halberstam was a reporter, a photographer, and even sold advertising. There he covered the Emmett Till murder trial, and later, at The Tennessean in Nashville, wrote about the beginnings of the Civil Rights movement. The New York Times later recruited Halberstam, who, at the age of 30, won the Pulitzer Prize for his coverage of the Vietnam War.

Harvard Crimson President Peter Zhu ’11 said Halberstam “stands out as someone to whom we can all aspire towards.”

The author of more than 20 books, including “The Children” and “The Best and the Brightest,” Halberstam was an avid sports lover, and also wrote books on Michael Jordan and the NFL. He died in a 2007 car crash in Menlo Park, Calif.

Halberstam’s daughter read an excerpt from the lecture on journalism he gave at the University of California, Berkeley, the night before he was killed. “There is, I think, craft. I think you can keep learning for those of you who are starting out. How do you do it? Knowing where to look. Knowing how to build steam. Knowing how to sustain a narrative drive. How to keep a reader interested, this is a real challenge. You have to make it accurate, then you have to learn how to dramatize it, to bring it alive, to find the people and the events to make it real. So you’re not just a reporter, and you’re not just a historian. You’re a playwright, too. You’ve got to bring the drama. Impress on people why they need to know it.”