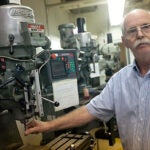 Gwynne Blakemore Evans, the Henry B. and Anne M. Cabot Professor of English Literature and the foremost Shakespearean textual scholar of his day, was born in Columbus, Ohio, on March 31, 1912. The son of Marshall Blakemore Evans and Theodora (Grose) Evans, he attended public schools in Columbus, where his father was head of the German Department at the Ohio State University. In high school, he spent a year at what is now Southampton University in England, where one of his masters was the celebrated Donne scholar J. B. Leishman. Despite his characteristic modesty, GBE once confessed that during this year he introduced the Lindy Hop to England. He received a B.A. from Ohio State in 1934, an M.A. from the University of Cincinnati in 1936, and a Ph.D. from Harvard in 1940.

GBE taught at Brooklyn College in the early 1940s and then married the happy inspiration of his life, Florence Elizabeth “Betty” Richey Evans, with W. H. Bond, later Houghton Librarian, as his best man. He served in the Army Signal Corps Intelligence at Bletchley Park, England, the Allied center for code-breaking. He never exaggerated his war effort, often joking that he had not helped to solve the German Enigma code but had, however, broken the Free French code. Upon his return, he taught at the University of Wisconsin and University of Illinois, where he edited The Journal of English and Germanic Philology, before returning to Harvard in 1967. During Vietnam protests of 1969, he patrolled the halls of Widener in the company of Herschel Baker in order to protect books against the threat of being destroyed in the troubles. Independent in pedagogical style, GBE was nonetheless pleased to follow his predecessor Alfred Harbage in sharing the teaching of Shakespeare with Harry Levin.

GBE was noted for unrivalled scholarly precision, which grew from his mastery of Elizabethan handwriting and the compositional techniques of sixteenth- and seventeenth‑century printing houses, allowing him to assess the evolution of a text from foul papers to fair copy. He published his first book in 1951, The Plays and Poems of William Cartwright, dramatist of the early seventeenth century, followed by the contribution of six volumes of Shakespearean Prompt-Books of the Seventeenth Century from 1960 to1980. His last book, published posthumously, the proofs of which he was correcting in his final days, is The Poems of Robert Parry. In between, his primary focus was on Shakespeare; he edited individual volumes of Richard III, Romeo and Juliet, and The Sonnets, the Variorum Supplement to 1 Henry IV, and two editions of his magnum opus, The Riverside Shakespeare (1974, 1997), a one-volume complete Shakespeare that was the leading edition in the United States and Britain for more than twenty-five years. Each of these efforts revealed extraordinarily precise scholarship. While no other of his labors matched the magnitude and influence of The Riverside Shakespeare, he had a soft spot in his heart for two editions.  His Romeo and Juliet was the first volume in the Cambridge University Press series of individual plays, one which, though he himself would never say it, set the tone for the entire series. His edition of The Sonnets rounded out his Shakespearean individual works on the very topic his mentor, Hyder Rollins, had made his own a generation earlier. To the last, he was as nimble in disentangling textual cruces and interpreting the essence of a text as any scholar half his age.

GBE knew the contribution his text made to the understanding of both scholars and general readers. He delighted in responses and critiques, especially the particular anecdote told by one of his students caught up in the Entebbe raid of 1976 in Uganda. In order to protect his young daughter in his arms as they left the plane, the student placed The Riverside Shakespeare (a thousand-page hardcover) in front of her as a shield. When the passengers later had some, but not all, of their seized possessions returned to them, the student was handed The Riverside with the words, “you may have this back, for it is a holy book.”

GBE was the recipient of a Guggenheim Fellowship and a Harvard Dexter Traveling Fellowship which, given the limitations of European travel in 1939–1940, he used to see the cathedral cities in New Mexico, Arizona, and Southern California. He was a member of the American Academy of Arts and Sciences and a treasured member of the Senior Common Room of Leverett House. The Tuesday Leverett luncheon gatherings of retired English professors (self-declared “old geezers”), provided a source of particular pleasure. These occasions were enhanced by foreign or native visitors, each the guest of one or another of the group. GBE and Dan Aaron saw to it that the presence of “young geezers” enlivened the group, another example of their commitment to passing on anecdotes, tradition, and knowledge.

As teacher and mentor, GBE was widely influential, extraordinarily generous with his time, and ever, even to a fault, modest. When a graduate student asked permission to dedicate her first book to him, in which she wished to call him “brilliant,” he refused. The revised dedication, equally true, if incomplete, settled on referring to him as a “civilizing influence—scholarly, modest, impeccable, kind.”  He wrote innumerable detailed letters of recommendation that were works of art and wonderfully effective. After his retirement from teaching in 1982, Evans continued to work steadily—and prolifically—in his Widener X office next to Child Library. Every day but Sunday he would arrive in the morning to work on a new edition, reviews, and notes, some of which were published in his late eighties and early nineties, and the ever-present letters of recommendation for former students seeking scholarship and travel monies. There he received a stream of current and former graduate student visitors whom he continued to advise and support. A desk adjacent to his own became a de facto office for visiting scholar friends whom he invited to join him while they were on sabbatical. Several scholars benefited from what was jokingly called the “Cratchit Desk,” a term referring only to the size of the table, not to any coal scuttle or negative disposition of its owner. He had an extensive collection of rare books, many of which he had purchased while serving in  England during the war, books  he  bestowed upon graduate students and friends whose work involved the subject of these volumes.

Evans was the recipient of a Festschrift, In the Company of Shakespeare: Essays on English Renaissance Literature, on the occasion of his ninetieth birthday. It comprised essays written by his former students and academic friends, who came from such disparate places as Arizona, Utah, Texas, Wisconsin, Missouri, and New York, to celebrate the volume with a memorable reception in the room at the Houghton Library where GBE had led his first seminar in bibliography at Harvard.

A graduate student who assisted him in Child referred to his having “a generosity and benevolent courtliness that is difficult to describe.” Within his old-school sense of chivalric distance and propriety, there was, in the words of one colleague, “a special sweetness.” GBE was a devoted husband and a much-loved father, and, in the words of his concertedly apolitical wife, a “yellow-dog Democrat.” His generous nature made it impossible for him truly to dislike anyone. However, despite an identification with the most traditional and canonical of cultural texts, he reserved a raised eyebrow and stern words for those whose politics lacked empathy and understanding for the full diversity of human experience. After all, he was a scholar who understood Shakespeare.