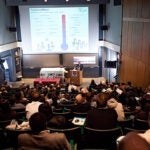 Harvard Physics Professor Gerald Gabrielse has been named the winner of the 2011 Julius Edgar Lilienfeld Prize by the American Physical Society (APS), awarded for outstanding contributions to physics.

The society also recognized Gabrielse’s excellence in teaching, for which he received Harvard’s Levenson Teaching Award in 2000, citing him for “exceptional skill in sharing the science with diverse audiences.”

“Receiving a prize for which all physicists are eligible is naturally a very affirming experience, of course, as is the recognition of success in lecturing to diverse audiences,” Gabrielse said in an email. “What makes this prize especially sweet is that it represents more than 20 years of work, in collaboration with a series of nearly 10 Harvard Ph.D. students. One thesis at a time, we developed methods to make an artificial atom — one single electron suspended in our trap apparatus — and to coax the electron in this to reveal the size of its internal magnet (and the fine structure constant) to an extremely high precision.”

The prize consists of $10,000, a certificate, and the opportunity to deliver three lectures, one to a society meeting, one at a research university, and a third at a predominantly undergraduate institution, according to the APS website.

Gabrielse received a bachelor’s degree from Calvin College in 1973 and a doctorate from the University of Chicago in 1980. A member of the U.S. National Academy of Sciences and a fellow of the American Physical Society, he received the APS Davisson-Germer Prize in 2002, Germany’s Humboldt Research Award in 2005, and Italy’s Tomassoni and Chisesi Prize in 2008. He received Harvard’s Ledlie Prize in 2004 for exceptional research.