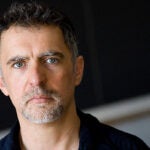 Most marathon runners know they need to consume carbohydrates before and during a race, but many don’t have a good fueling strategy.

Now, one dedicated marathoner — an M.D./Ph.D. student in the Harvard-MIT Division of Health Sciences and Technology — has taken a more rigorous approach to calculating just how much carbohydrate a runner needs to fuel himself or herself through 26.2 miles, and what pace that runner can reasonably expect to sustain.

The result is a new model, described in the Oct. 21 issue of the journal PLoS Computational Biology, which allows runners to calculate personalized targets using an estimate of their aerobic capacity.

The Harvard-MIT scientist, Benjamin Rapoport, was inspired by his experience in the 2005 New York Marathon. As he entered Manhattan for the last several miles of the race, his legs just didn’t want to keep up the pace. He was experiencing a common phenomenon among marathoners, known as “hitting the wall.” Essentially, the body runs out of fuel, forcing the runner to slow down dramatically.

“You feel like you’re not going anywhere,” says Rapoport. “It’s a big psychological letdown, because you feel powerless. You can’t will yourself to run any faster.”

Of the hundreds of thousands of people who run a marathon each year, more than 40 percent hit the figurative wall, and 1 to 2 percent drop out before finishing.

During strenuous exercise such as running, the body relies on carbohydrates for most of its energy, even though fat stores are usually much larger. Most of those carbohydrates come from glycogen stored in the liver and in the leg muscles. A small amount of glucose is also present in the blood.

Hitting the wall occurs when those stored carbohydrates are completely depleted, forcing the body to start burning fat. When that happens, the runner’s pace can drop about 30 percent, and ketones, the byproducts of fat metabolism, start building up in the body, causing pain and fatigue.

“People think hitting the wall is inevitable, but it’s not,” says Rapoport, who has run 18 marathons, including a personal best of 2:55 at this year’s Boston Marathon. “In order to avoid it, you need to know what your capabilities are. You need to set a target pace that will get you to the finish without hitting the wall. Once you do that, you need to make sure you appropriately carbo-load.”

To create his new model, Rapoport identified two fundamental physiological factors that limit performance in endurance runners: aerobic capacity and the ability of the leg muscles to store carbohydrates as glycogen. Aerobic capacity, also known as VO2max, is a measure of how much oxygen the body can transport to the muscles and consume during aerobic exercise. Oxygen is critical to muscle performance because glucose can only be broken down completely in the presence of oxygen.

The average untrained male’s VO2max of 45 ml/kg/min can be boosted with training, and elite marathoners often have VO2max in excess of 75 ml/kg/min. Measuring exact VO2max requires a treadmill stress test at maximum effort, but it can be estimated by measuring heart rate while running at a constant pace on a treadmill.

Using Rapoport’s model, any runner training for a marathon who estimates his or her VO2max can figure out a range of paces, including the fastest safe pace he or she can sustain without hitting the wall. For example, a man with a VO2max of 60 ml/kg/min could run the race in 3:10 without consuming any carbs during the race.

A VO2max of 60 ml/kg/min is about the highest that most men can attain through training, and 3:10 happens to be a gold standard in marathoning: It’s the time men aged 18 to 34 must achieve to qualify for the Boston Marathon. For women of the same age, the qualifying time is 3:40, which is also the time that Rapoport’s model predicts for a runner with a VO2max of 52 ml/kg/min, about the highest level the average woman can attain through training.

Rapoport’s model also allows runners to calculate how much carbohydrate they need to consume during the race if they want to run a faster pace without hitting the wall. For example, a runner with a VO2max of 50 ml/kg/min who wanted to achieve the 3:10 Boston Marathon qualifying time would need to consume 30 calories of carbohydrate per kilogram of body weight (about 2,090 calories for a 154-pound runner), assuming that his legs make up at least 15 percent of his body mass.

While physiological models can help runners plan for their races, Rapoport says that other factors such as mental toughness and course terrain also play important roles in how a runner will perform in any given marathon. One of the most important things a runner should do during a marathon is stick to his or her target pace, Rapoport says. When runners start out too fast, they burn a higher percentage of carbohydrates, increasing the risk of hitting the wall.

“Once you figure out your target pace, you have to stay at it,” he says. “People sometimes get too excited or change their game plan on the day of the race, and that’s a tactical mistake.”

Rapoport’s “Marathon Calculator” applet will soon be available. You can also learn more about his research through this link.