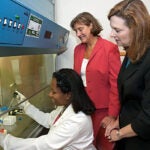 Matthew Nock is the son of an auto mechanic, a Harley-Davidson aficionado, and the first member of his family to graduate from college. He’s now also a tenured member of the Harvard faculty.

The newly promoted professor of psychology is one of four siblings from a blue-collar New Jersey family. Both of his brothers joined the military and eventually found work echoing their father’s: one as a mechanic and the other as a mechanical engineer who builds robots for a military contractor. Their sister, the youngest of the four, now works at Sirius Radio.

Nock took his first psychology class during his last year in high school, and became “fascinated by the idea of spending my life studying human behavior.” He went on to major in psychology at Boston University (BU), graduating in 1995.

“I was interested in biology and philosophy, and psychology seemed like a good marriage of the two,” Nock said. In particular, he recalls loving abnormal psychology, where he first got to study intriguing subjects such as suicide and addiction and to ask the question: Why do people do what they do?

After graduation, Nock moved to New York City. But with his B.A. and no clinical work or lab experience, he found it hard to land a job in psychology.

One experience Nock did have to his name, however, was as a cook: He started working in a BU cafeteria during his undergraduate years to help pay his tuition.

“By the time I was a senior, I was head of the pasta program,” he said. “In fact, the only recommendation letter I got when graduating was from the pasta people.”

What’s a new psychology graduate with expertise in making pasta to do? Nock started out as a busboy and then worked as a cook for Bar 6, a trendy establishment in the West Village frequented by such celebrities as Sean Penn and Marisa Tomei.

While cooking or bussing tables each night, he spent his days volunteering for research jobs around the area, including at Cornell Medical School. After a stint working for a suicide hotline, he was hired part time as a research coordinator for the hotline.

Working for the hotline was not his first encounter with destructive behavior. During his junior year at BU, Nock spent a semester abroad in London, where he worked in a mental hospital.

“I was the only male in the study-abroad psychology track that year, and so I was the one who got placed in the violent ward of the hospital,” he said.

It was Nock’s first real interaction with the suicidal people he’d been studying in his abnormal-psychology classes.

“The clinical staff had no clear idea why [patients] did this,” he said. “It was an incredibly challenging problem.”

Nock eventually attended graduate school at Yale University. He studied suicide, self-injury, and conduct disorder, earning his degree in clinical psychology. He landed an internship at New York University’s Bellevue Hospital, working first with ER inpatients, then with adolescent patients and outpatients. It was there that Nock became increasingly interested in improving the prediction and treatment of suicidal tendencies.

Nock’s current work at Harvard attempts to fill this gap between psychological research and practical psychology.

“A lot of clinical treatments are not scientifically based,” Nock said. “I want to help to bring our science to bear on how suicidal people are identified and helped in the real world.”

Of Harvard, Nock says he’s impressed with the commitment and pursuit of excellence generally, especially by the students.

“They are smart and passionate about everything they’re doing,” he said.

“I’m a Yankees fan,” he admitted, “but I’ll tolerate the Red Sox fans for the electricity of this place.”