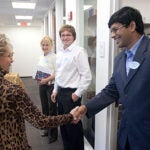 $12.3 million gift to Center for Ethics

In his senior year, center Chris LeRoy becomes a starter

When Chris LeRoy ’11 got a talking-to from his coach, he listened.

“Coach Murphy talked to me in the off-season about becoming a tougher, nastier player on the field, and I applied that as much as I could,” said the center offensive lineman. “The difference between this year and last year is the intensity in which I approach football.”

Now LeRoy, who has played football since age 8, is experiencing his first year as a starter with the Crimson. He saw no action on the field as a freshman, but worked his way up, appearing in three games as a sophomore, and nine as a junior.

And as a senior, LeRoy’s hard work paid off just in time.

“I made a conscious effort to give 110 percent effort. Working hard has always come naturally to me,” the 6-foot-3, 290-pound LeRoy said.

In the spring, the government concentrator was awarded the Matt Birk Most Improved Offensive Line Award. LeRoy stuck around Harvard over the summer, too, working out and training for the season.

“Throughout the preseason, this being my last year, I’ve tried to embrace every opportunity, and tried to be a leader,” he said. “I just really wanted to make my last season a memorable one.”

“I love the intensity and camaraderie of football,” said LeRoy. “I think it’s a very unique sport in that one person cannot win a game for you. With basketball, if you have a great player, he can take care of things. But in football, you need everybody to do their job correctly in order to be successful.”

After football, LeRoy is looking forward to returning to another love: the piano.

“Between football and school, my playing has gone way down,” he said.

LeRoy began piano lessons when he was 7. “My mom is a big music person,” he revealed. “She really encouraged my sister and myself to get involved with singing and piano.”

With graduation looming, LeRoy plans to pursue a job in business or law, eventually enrolling in law school.

But until then, it’s football all the time, and being a powerhouse isn’t easy. There’s schoolwork and practice to balance, not to mention sleep — and thousands and thousands of calories. For breakfast, LeRoy typically eats “two omelets, another pile of scrambled eggs, home fries, banana, orange juice, yogurt, fruit salad …”

Harvard House masters refer to LeRoy and his teammates as “the wall of flesh.”

But for LeRoy, it’s all worth it.

“When you’re on the field, nothing else really matters.”

The Crimson go up against Princeton University on Oct. 23. For a complete schedule, visit GoCrimson.