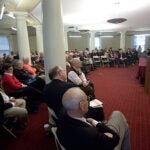 David Herbert Donald was one of the enormously influential group of American historians who, after World War II, re-envisioned major segments of the American past. They put a new face on political ideas and party behavior (Richard Hofstadter), the post-Civil War South and Jim Crow (C. Vann Woodward), immigration and ethnicity (Oscar Handlin), culture and society (Daniel Boorstin), Colonial intellectual history (Bernard Bailyn), and African-Americans and racism (John Hope Franklin), American law (J. Willard Hurst), and business (Alfred D. Chandler, Jr.). In doing so, they made their discipline, for a season, a significant intellectual force in the wider culture.

One of David Donald’s signal contributions to this enterprise was to bring an unmatched psychological understanding to the lives of major figures in the American past: Charles Sumner, Abraham Lincoln, Thomas Wolfe. And although he was a white Southerner, a Mississippian, whose family came to America in the 1630s, he retold, with elegance, eloquence, and understanding the antislavery/Union side of the great American saga of the Civil War and Reconstruction. In this he shared with John Hope Franklin (who died less than two months before him) the distinction of freeing the Civil War-Reconstruction period from the fetters of region and race by which it had so long been bound.

David Donald was born in Goodman, Mississippi, a town of 650 people, half white and half black, on October 1, 1920, to the family of a large cotton farmer. His mother was a graduate of Mississippi State College for Women and a schoolteacher. He earned his B.A. degree in the South, from Millsaps College, in 1941, but then went North to the University of Illinois to get his M.A. (1942) and Ph.D. (1946), studying with the distinguished Lincoln scholar J. G. Randall.

Donald’s teaching career, like his restless, probing mind, was peripatetic. From 1947 to 1949 he labored as an Instructor of History in the lightly compensated sweatshop of Columbia’s School of General Studies. He then vaulted into the sunny uplands of real-faculty status as an associate professor at Smith College (1949-1951), and returned to Columbia at the reduced rank (but Graduate Faculty status) of assistant professor (1951-1952). In 1952 he gained tenure and stayed at Columbia until 1959. Then he went to Princeton University (1959-1962), to Johns Hopkins University (1962-1973), and finally to Harvard University as Charles Warren Professor of History (1973-2001).

As if the many stops on the Grand Tour of his mainstream career were not enough, he put in visiting stints at Amherst College (1950), as a Fulbright Lecturer at University College of North Wales (1953-1954), and as Harmsworth Professor at the University of Oxford (1959-1960).

By common consent Donald was a gifted teacher. He was awarded Harvard’s Levinson Prize for outstanding instruction. His precise and ordered mind, combined with unusual verbal facility, made his lectures intellectually stimulating and widely accessible. His graduate students were well aware of the special benefit of studying with him, and they gave their Festschrift to him the apt title A Master’s Due (1985).

His customary persona was of courteous demeanor swathed in a warm Southern accent. Beneath the courtly manner lay strong convictions, and if he thought he was improperly challenged he let you know it. His relationships with his departmental colleagues could be edgy, but they stemmed from the fact that he cared so deeply about the students he taught and the discipline he loved.

Donald’s great legacy is, of course, his work: more than thirty books that recast, and deepened in maturity, the prevailing perception of the Civil War era and the men who did so much to shape it.

This achievement was reflected as well in his more general work on the period. He took on the task of updating the leading survey, James G. Randall’s The Civil War and Reconstruction (1961, 2001), thereby bringing his lucid, balanced, and probing mastery of the subject to a large student audience. He reached out as well to the substantial number of readers who sought to understand this most contested segment of the American experience with Why the North Won the Civil War (coauthored with Randall, 1960), the insightful Divided Union: The Politics of Reconstruction (1965), and most influentially, Lincoln Reconsidered (1956, 1961). This was a brilliant collection of essays about Lincoln and his context, which illuminated its subject much as Hofstadter’s The American Political Tradition (1948), Woodward’s The Strange Career of Jim Crow (1955), and Hurst’s Law and the Conditions of Freedom in Nineteenth-Century America (1956) did theirs.

It was as a biographer that Donald made his most profound impression, and for which he will be best remembered. His first book was Lincoln’s Herndon (1948), a study of Lincoln’s closest associate. Correcting encrusted myths about Lincoln, it announced the appearance of an important new voice in Civil War studies. Charles Sumner and the Coming of the Civil War (1960) and Look Homeward: A Life of Thomas Wolfe (1987) won Pulitzer Prizes in Biography. His work on Sumner, a brilliant, strongly psychological study of that complex and conflicted man, was completed with the appearance of Charles Sumner and the Rights of Man in 1970.

Lincoln (1995) secured his place as the preeminent Civil War era scholar of his generation. Donald said that his intention was “to tell the story of Lincoln’s life as he saw it, making use only of the information and ideas that were available to him at the time.” To carry off this notably self-limiting task was a triumph of the biographer’s art. The result stands as a summation of Donald’s work at large: balanced yet insightful, elegant and convincing in its artful directness and simplicity.

At the time of his death, Donald was at work on a character study of John Quincy Adams. It was perhaps not the least of the misfortunes that dogged Adams’s life that he was not to be the beneficiary of the master’s elegant, insightful due.

Donald was married from 1955 until his death to Aida DiPace, longtime editor-in-chief of the Harvard University Press, Theodore Roosevelt biographer, and co-editor with her husband of the first two volumes of the Diary of Charles Francis Adams. Their son Bruce is Gross Professor of Computer Science at Duke University and Professor of Biochemistry at Duke University Medical Center.