Creating power by the Yard 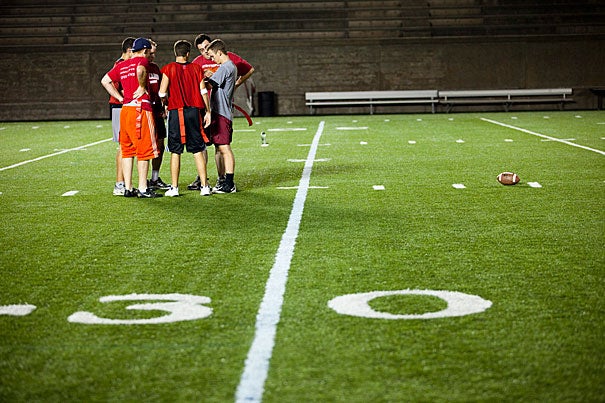 Sustainability often happens behind the scenes. But Harvard’s newest renewable energy project is also among its most conspicuous: more than 3,200 square feet of solar panels installed over the summer atop the three buildings that make up Canaday Hall, a freshman dormitory on the northern periphery of Harvard Yard.

The panels are part of a solar thermal and steam tunnel heat-recovery project that’s expected to supply at least 60 percent of domestic hot water for all buildings in the Yard.  By using thermal energy to heat water instead of using fossil fuels, the Faculty of Arts and Sciences (FAS) will take another step toward meeting the University’s goal of cutting greenhouse gas emissions 30 percent below a 2006 baseline by 2016, including new growth.

The solar panels were installed without needing to modify Canaday’s roofs, which were already angled toward the south at about 35 degrees. The existing roof proved to be an optimal environment for capturing solar energy, said Jay Phillips, senior director of operations for FAS.

“This was an ideal project for many reasons,” Phillips said. “The prominent location made it especially attractive because we could take advantage of the opportunity to educate the Harvard community about the benefits of clean, renewable energy for our campus.”

For more than 15 years, five large natural gas-fired boilers beneath Canaday have provided hot water to the buildings in the Yard, feeding a loop that runs beneath the historic grounds.  A network of glycol-filled pipes now connects the rooftop solar panels to the new hybrid heating system, using the sun’s power to heat water for showers, hand washing, and dishwasher.

“It’s nice to know that when I use hot water, it isn’t at the expense of the environment,” said Canaday resident Jody Heck. “I love knowing that my hot water comes from solar panels on my dorm. It is a great idea.”

Glycol was used, in part, because it will not freeze during a harsh New England winter. A solar thermal system like the one installed on Canaday’s roofs is 55.4 percent efficient, compared with just 20 to 30 percent for a conventional fossil fuel system.

The hybrid system also collects exhaust heat from a steam tunnel under Canaday.  A new fan in the tunnel draws hot air up to a vent on the Yard.  The fan includes a set of eight coils that capture the heat at temperatures of up to 105 degrees, running it through additional glycol loops that feed into a common buffer tank in the basement of Canaday, where the heat is combined with that from the solar array.

This 1,000-gallon buffer tank, which replaces the need for gas-fired boilers, pre-heats city of Cambridge water to 130 degrees before it is pumped to buildings around the Yard.  During early September’s heat wave, Phillips says, 100 percent of the Yard’s hot water needs were met through the new hybrid system during daytime.

On average, about 40 percent of the thermal energy provided by the new system will come from the solar panels, with the remaining 60 percent supplied by the steam tunnel heat recovery.  The older, gas-fired boilers will remain as a back-up heating source, especially during cloudy days when the solar panels are not able to collect sufficient thermal energy.

The project will prevent an estimated 166 metric tons of CO2, a key greenhouse gas, from being released into the atmosphere annually.  It is expected to pay for itself within 10 years.

A monitoring system will allow Canaday residents and the Harvard community to assess the system’s productivity, displaying readings on public kiosks and web-based graphs that can also be easily exported for analysis.