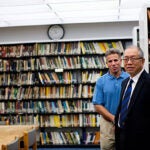 War and disease are orphaning children around the world in staggering numbers. AIDS alone is expected to have created 25 million orphans by this year, with more than one in 10 children under age 15 orphaned in a dozen African countries, according to UNICEF.

The problem isn’t just an African one, however. In Central and Eastern Europe, an estimated 1.5 million children live in public care, while the number of children without parental care in Russia has doubled in 10 years.

For the last decade, Harvard researchers have been casting a light on orphan care, detailing the horrible toll institutions take on young lives, from physical stunting to delays in language development to mental and emotional disabilities. The work also highlights the improvements that can be won with high-quality foster care.

Charles Nelson, professor of pediatrics at Harvard Medical School and director of research at Harvard-affiliated Children’s Hospital Boston Developmental Medicine Center, said that though foster care is widely used in the United States, that’s not the case worldwide. Eight million orphaned and abandoned children live in government-run institutions, sometimes in horrific conditions that take a lasting physical and mental toll.

Since 2000, Nelson and colleagues at Tulane University and the University of Maryland have conducted a study of 136 Romanian children in both government-run orphanages and high-quality foster care. The foster care system — the nation’s first — was set up as part of the work. The results have not only provided a host of statistics about several types of developmental delays that occur in institutional care, they also provided impetus for the Romanian government to begin its own foster system and to pass a law prohibiting institutionalization of children younger than age 2.

Nelson presented results of his work Monday (Oct. 4) at the Center for Population and Development Studies. Center director Lisa Berkman, Thomas D. Cabot Professor of Public Policy and of Epidemiology, praised Nelson’s interdisciplinary approach, calling it thought-provoking, but also cautioned that the picture of early childhood deprivation that emerges can be disturbing.

The study covered six orphanages in the Romanian capital of Bucharest. It began in 2000, about 10 years after the fall of Romanian dictator Nicolae Ceausescu. Under Ceausescu, Nelson said, the prevailing belief was that the state could provide better care than parents, a belief that endured at the time of the study’s start, when there were about 150,000 children in state-run institutions, mainly abandoned because their parents were poor.

The initial assessments found children in conditions so wrenching, Nelson said, that researchers had a rule that they wouldn’t cry in front of the children and sometimes had to excuse themselves to step out of the room. Babies under age 1 or 2 spent their days lying on their backs, staring at the blank ceiling over their cribs, leading to a high prevalence of crossed eyes, which went away as they got older, became more active, and exercised their eye muscles. Caregiver ratios were high, with one caregiver to 15 babies, and one caregiver to 20 to 25 toddlers. Conditions tended to be better at urban institutions, but in some rural institutions, Nelson said, children were chained to the beds for years on end.

“On the whole it was just breathtakingly awful,” Nelson said. “One of the eeriest things about these institutions is how quiet they are. Nobody’s crying.”

The study identified institutionalized children between ages 6 months and 31 months, half of whom went to families participating as foster parents. Another 72 children living with their families in the community also participated as controls.

Researchers had to overcome societal preconceptions against foster care to run the study, Nelson said. Not only was there a prevailing attitude that the government could raise children better than parents, there was also a prejudice against taking unrelated children into one’s home, something many believed only a pedophile would do.

Researchers also spent a lot of time considering the ethical issues related to the work, Nelson said, moving ahead because there were really no alternatives in the country to institutionalization, since the only foster system was the one created in the study. That changed during the course of the study, though. Once the government set up foster care, study children were free to leave the institution for foster care, or to leave foster care for reunification with their parents. Just 14 remain institutionalized today, Nelson said, while 30 to 35 are in their original foster homes.

Researchers did a battery of tests at various intervals through age 8. They plan to return shortly to begin conducting tests on children as they reach age 12, Nelson said.

“It’s quite dramatic, the number of ways these kids are deprived,” Nelson said.

Institutionalized children were often physically stunted, Nelson said, with delayed growth not related to malnourishment. The stunting happened despite balanced diets at the institutions, he said. Once in foster care, he said, children began to grow and catch up to their peers. If they don’t catch up it is often head size that is lacking, Nelson said, which translates to smaller brain size and lasting cognitive problems.

In testing for intelligence, institutionalized children averaged a score of 74, on the threshold of mental retardation, compared with 103 with the community control group. After a period of foster care, IQs jumped about 10 points, Nelson said, an amount that would make a difference in school performance or functioning as an adult. The timing of the deinstitutionalization seems critical, as children older than 2 years when they went into foster care were less likely to experience improvements.

“If we thought IQ was deleteriously affected, language was clobbered,” Nelson said.

Tests showed increased prevalence of psychiatric disorders among institutionalized children. Foster care helped those experiencing anxiety and depression, but not those with outwardly manifested conditions such as ADHD and oppositional defiant disorder.

Testing also showed widespread attachment problems among institutionalized children, with just 20 percent at 42 months having a secure attachment and another 20 percent with no attachment at all. A high proportion of children in the study showed a type of attachment disorder where they were socially uninhibited and overly trusting of strangers. During one test, in which a stranger comes to the door and unexpectedly asks the child to come with him, 55 percent of institutionalized children went with the stranger, while 25 percent of foster children did. Just one of the community control children did.

“Kids at 54 months just don’t do this,” Nelson said. “What we’re worried about is when these kids exit the institution, how ready will they be for the real world?”